Disney English (迪士尼英语) is a subsidiary of Disney Publishing Worldwide' Disney Learning division that specializes in English language training for young learners, ages 2 to 12, in China using Disney characters.[1] Classes use a curriculum put together by teaching professionals from China, Europe, and the United States.[2] The program uses the "Disney Immersive Storytelling Approach" which creates an immersive environment incorporating Disney characters to make learning more fun for children.[3]

The first Disney-operated learning center opened in Shanghai, China in October 2008. As of November 2012, there are 44 Disney English Learning Centers in 10 cities across China.[4] By 2015, Disney plans to expand the program to 148 schools teaching 150,000 children annually with operating earnings expected to surpass $100 million.[1]

The program is designed to help extend Disney's brand in China through childhood marketing [5][6] and coincides with the development of the Shanghai Disneyland Park.

The program is not a Western program but rather a global program that gives children a chance to combine what they know locally with the opportunity to see things globally.

Disney English uses an immersive environment[3][7] approach that focuses on the claims of Multiple Intelligences and Experiential learning while focusing on communication.[8] The program incorporates singing, interactive games, role-play and other activities aiming to engage children with the language.[3][7] Classes average only 12 with a maximum of 15[1] and are given 1.5 to 2 hours per week.[9] The program costs about 12,000 yuan for 96 hours of instruction.[1][2]

Each classroom is equipped with an interactive whiteboard, an additional projection wall, and a sound system. A typical center will have 5 to 10 classrooms, each themed with a specific Disney property, for example: Snow White, The Lion King, Cars, Peter Pan, Tinker Bell, Winnie The Pooh, Finding Nemo and Toy Story. 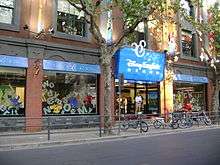 The outside of the first Disney English learning center on Mao Ming Road in Shanghai, China.

The first center, located on Maoming Road in Shanghai, China, was opened in September 2008 and relocated to Henan Road in 2012.

As of November 2012, there are a total of 44 Disney English centers in 10 cities across China, including Shanghai, Beijing, Suzhou, Tianjin, Hangzhou, Ningbo, Nanjing, Chengdu, Wuhan and Guangzhou.[4]

The opening of additional learning centers coincides with the development of the Shanghai Disneyland Park.[11][12] The entry into the English teaching market is expected to provide Disney with additional growth opportunities.[13]

With the launch of the Disney owned program, several unauthorized schools using the Disney name or characters have been closed.[14]

In August 2014, Disney English was sued in an American court for subjecting workers and learners to highly polluted air in the classrooms. Disney English chose to settle out of court.[15]

The program has been criticized as an effort to market Disney in China. "US entertainment giant Disney saw this as a unique opportunity to teach English to small children, while at the same time establishing an extention [sic] of its branded products and characters across the country."[16] Shang Yang, chairman of Shangyang Enterprise Management Consulting has stated that "They're [Disney] starting years early, brainwashing Chinese children and cultivating them as potential clients in a very indirect, yet penetrating fashion."[9][17] Mary Bergstrom, founder of Bergstrom Group, a Shanghai Consultancy stated "What Disney is doing now in China is growing a future consumer base."[17] As Wang Bing, an analyst at Philip Securities Research in Shanghai puts it, "Being surrounded by all sorts of Disney products and characters, it's almost impossible for parents and their children not to love Disney."[17]