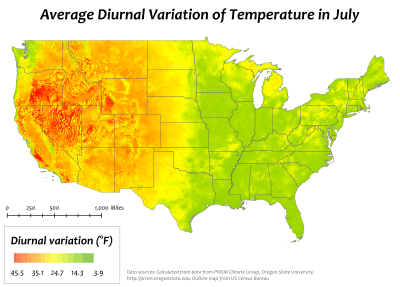 As solar energy strikes the earth’s surface each morning, a shallow 1–3-centimetre (0.39–1.18 in) layer of air directly above the ground is heated by conduction. Heat exchange between this shallow layer of warm air and the cooler air above is very inefficient. On a warm summer’s day, for example, air temperatures may vary by 16.5 °C (30 °F) from just above the ground to waist height. Incoming solar radiation exceeds outgoing heat energy for many hours after noon and equilibrium is usually reached from 3–5 p.m. but this may be affected by a variety of different things such as large bodies of water, soil type and cover, wind, cloud cover/water vapor, and moisture on the ground.[1]

Diurnal temperature variations are greatest very near the earth’s surface.

High desert areas typically have the greatest diurnal temperature variations. Low lying, humid areas typically have the least. This explains why an area like the Snake River Plain can have high temperatures of 38 °C (100 °F) during a summer day, and then have lows of 5–10 °C (41–50 °F). At the same time, Washington D.C., which is much more humid, has temperature variations of only 8 °C (14 °F);[1] urban Hong Kong has a diurnal temperature range of little more than 4 °C (7.2 °F).

Diurnal temperature variation is of particular importance in viticulture. Wine regions situated in areas of high altitude experience the most dramatic swing in temperature variation during the course of a day. In grapes, this variation has the effect of producing high acid and high sugar content as the grapes' exposure to sunlight increases the ripening qualities while the sudden drop in temperature at night preserves the balance of natural acids in the grape.[4]