For other uses, see Document (disambiguation).

A document is a written, drawn, presented or recorded representation of thoughts. Originating from the Latin Documentum meaning lesson - the verb doceō means to teach, and is pronounced similarly, in the past it was usually used as a term for a written proof used as evidence. In the computer age, a document is usually used to describe a primarily textual file, along with its structure and design, such as fonts, colors and additional images.

The modern term 'document' can no longer be defined by it transmission medium (such as paper), following the existence of electronic documents. 'Documentation' has more meanings than a written or drawn presentation of thoughts.

The formal term 'document' is defined in Library and information science and in documentation science, as a basic theoretical construct. It is everything which may be preserved or represented in order to serve as evidence for some purpose. The classical example provided by Suzanne Briet is an antelope: "An antelope running wild on the plains of Africa should not be considered a document, she rules. But if it were to be captured, taken to a zoo and made an object of study, it has been made into a document. It has become physical evidence being used by those who study it. Indeed, scholarly articles written about the antelope are secondary documents, since the antelope itself is the primary document." (Quoted from Buckland, 1998 [1]). (This view has been seen as an early expression of what now is known as actor–network theory).

The concept of "document" has been defined as “any concrete or symbolic indication, preserved or recorded, for reconstructing or for proving a phenomenon, whether physical or mental" (Briet, 1951, 7; here quoted from Buckland, 1991).

A much-cited article asked "what is a document[?]" and concluded this way: “The evolving notion of ‘‘document’’ among (Jonathan Priest). Otlet, Briet, Schürmeyer, and the other documentalists increasingly emphasized whatever functioned as a document rather than traditional physical forms of documents. The shift to digital technology would seem to make this distinction even more important. Levy’s thoughtful analyses have shown that an emphasis on the technology of digital documents has impeded our understanding of digital documents as documents (e.g., Levy, 1994[2]). A conventional document, such as a mail message or a technical report, exists physically in digital technology as a string of bits, as does everything else in a digital environment. As an object of study, it has been made into a document. It has become physical evidence by those who study it.

Documents are sometimes classified as secret, private or public. They may also be described as a draft or proof. When a document is copied, the source is referred to as the original.

There are accepted standards for specific applications in various fields, such as:

Such standard documents can be created based on a template.

The page layout of a document is the manner in which information is graphically arranged in the document space (e.g., on a page). If the appearance of the document is of concern, page layout is generally the responsibility of a graphic designer. Typography deals with the design of letter and symbol forms, as well as their physical arrangement in the document (see typesetting). Information design focuses on the effective communication of information, especially in industrial documents and public signs. Simple text documents may not require a visual design and may be handled by an author, clerk or transcriber. Forms may require a visual design for the initial fields, but not to fill out the forms. 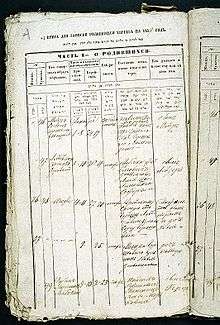 A birth certificate from 1859.

Traditionally, the medium of a document was paper and the information was applied to it as ink, either by hand (to make a hand-written document) or by a mechanical process (such as a printing press or, more recently, a laser printer).

Through time, documents have also been written with ink on papyrus (starting in ancient Egypt) or parchment; scratched as runes or carved on stone using a sharp apparatus (such as the Tablets of Stone described in the bible); stamped or cut into clay and then baked to make clay tablets (e.g., in the Sumerian and other Mesopotamian civilisations). The paper, papyrus or parchment might be rolled up as a scroll or cut into sheets and bound into a book. Today short documents might also consist of sheets of paper stapled together.

Modern electronic means of storing and displaying documents include:

Digital documents usually have to adhere to a specific file format in order to be useful.

That documents cannot be defined by their transmission medium

Documents in all forms are frequently found to be material evidence in criminal and civil proceedings. The forensic analysis of such a document falls under the scope of questioned document examination. For the purpose of cataloging and managing the large number of documents that may be produced in the course of a lawsuit, Bates numbering is often applied to all documents so that each document has a unique, aribitrary identifying number.