The dual-route theory of reading aloud was first described in the early 1970s.[1] This theory suggests that two separate mental mechanisms, or cognitive routes, are involved in reading aloud, with output of both mechanisms contributing to the pronunciation of a written stimulus.[1][2][3]

One mechanism, termed the lexical route, is the process whereby skilled readers can recognize known words by sight alone, through a "dictionary" lookup procedure.[1][4] According to this model, every word a reader has learned is represented in a mental database of words and their pronunciations that resembles a dictionary, or internal lexicon.[3][4] When a skilled reader sees and visually recognizes a written word, he or she is then able to access the dictionary entry for the word and retrieve the information about its pronunciation.[2][5] The internal lexicon encompasses every learned word, even exception words like 'colonel' or 'pint' that don't follow letter-to-sound rules. This route doesn't enable reading of nonwords (example 'zuce').[1][5] There is still no conclusive evidence whether the lexical route functions as a direct pathway going from visual word recognition straight to speech production, or a less direct pathway going from visual word recognition to semantic processing and finally to speech production.[2]

The nonlexical or sublexical route, on the other hand, is the process whereby the reader can "sound out" a written word. This is done by identifying the word's constituent parts (letters, phonemes, graphemes) and, applying knowledge of how these parts are associated with each other, for example how a string of neighboring letters sound together.[1][4][5] This mechanism can be thought of as a letter-sound rule system that allows the reader to actively build a phonological representation and read the word aloud.[2][3] The nonlexical route allows the correct reading of nonwords as well as regular words that follow spelling-sound rules, but not exception words. The dual-route hypothesis of reading has helped researchers explain and understand various facts about normal and abnormal reading.[2][4][5][6] 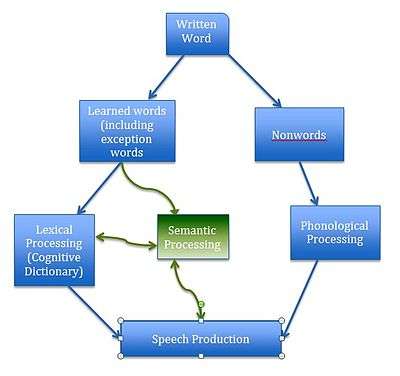 The mechanisms involved in dual-route processing, moving from the recognition of a written word to speech production.

According to research, the amount of time required to master reading depends on the language's adherence to phonological rules.[7] A written language is described as transparent when it strongly adheres to spelling-sound rules and contains few exception words. Because of this, the English language (low transparency) is considered less transparent that French (medium transparency) and Spanish (high transparency) which contain more consistent grapheme-phoneme mappings. This difference explains why it takes more time for children to learn to read English, due to its frequent irregular orthography, compared to French and Spanish.[7] The Spanish language's reliance on phonological rules can account for the fact that Spanish-speaking children exhibit a higher level of performance in nonword reading, compared to English and French-speaking children. Similarly, Spanish surface dyslexics exhibit less impairment in reading overall, because they can rely upon consistent pronunciation rules instead of processing many exception words as a whole in the internal lexicon.[7] The dual-route system thus provides an explanation for the differences in reading acquisition rates as well as dyslexia rates between different languages.[7]

Skilled readers demonstrate longer reaction times when reading aloud irregular words that do not follow spelling-sound rules compared to regular words.[8] When an irregular word is presented, both the lexical and nonlexical pathways are activated but they generate conflicting information that takes time to be resolved. The decision-making process that appears to take place indicates that the two routes are not entirely independent from one another.[8] This data further explains why regular words, that follow spelling-sound rules but also have been stored in long-term memory, are read faster since both pathways can "agree" about the issue of pronunciation.[5][8]

Attentional demands of each route

According to the current model of dual-route processing, each of the two pathways consumes different amounts of limited attentional resources.[8] The nonlexical pathway is thought to be more active and constructive as it assembles and selects the correct subword units from various potential combinations. For example, when reading the word "leaf", that adheres to spelling to sound rules, the reader must assemble and recognize the two-letter grapheme "ea" in order to produce the sound "ee" that corresponds to it. It engages in controlled processing and thus requires more attentional capacities, which can vary in amount depending on the complexity of the words being assembled.[8] On the other hand, the processing that takes place in the lexical pathway appears to be more automatic, since the word-sound units in it are pre-assembled. Lexical processing is thus considered to be more passive, consuming less attentional resources.[8]

The dual-route hypothesis to reading can help explain patterns of data connected to certain types of disordered reading, both developmental and acquired.[9] 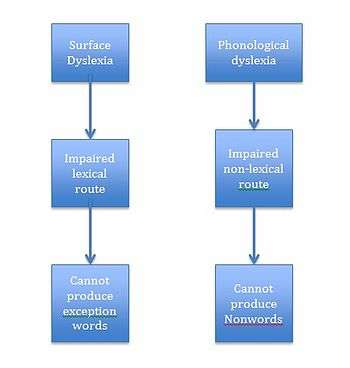 Children with reading disorders rely primarily on the sub-lexical route while reading.[10] Research shows that children can decode non-words, letter by letter, accurately but with slow speed. However, in decision tasks, they have trouble differentiating between words and pseudohomophones (non words that sound like real words but are incorrectly spelled), thereby showing that they had impaired internal lexicons.[10] Because children with reading disorders (RD) have both slow reading speeds and impaired lexical routes, there are suggestions that the same processes are involved in lexical route and fast naming of words.[10] Other studies have also confirmed this idea that rapid naming of words is more strongly correlated with orthographical knowledge (lexical route) than with phonological representations (sub-lexical route). Similar results were observed for patients with ADHD.[10] Research concludes that reading disorders and ADHD have common properties: lexical route processing, rapid reading and sublexical route processing deficits as well.[10]

Acquired surface dyslexia arises after brain damage in a previously literate person and results in pronunciation errors that indicate impairment of the lexical route.[2][6] Patients can accurately read words and nonwords that comply with the letter-sound rules of the sublexical system but mistakenly pronounce exception words.[4][6] For example, they will read the word "flood" as if it rhymed with "mood".[2]

Acquired phonological dyslexia is a type of dyslexia that results in an inability to read nonwords aloud and to identify the sounds of single letters. However, patients with this disability can holistically read and correctly pronounce words, regardless of length, meaning, or how common they are, as long as they are stored in memory.[2][4] This type of dyslexia is thought to be caused by damage in the nonlexical route, while the lexical route, that allows reading familiar words, remains intact.[2]

Computational modeling of the dual-route process

A computational model of a cognitive task is essentially a computer program that aims to mimic human cognitive processing[5][11] This type of model helps bring out the precise parts of a theory and disregards the ambiguous sections, as only the clearly understood parts of the theory can be converted into a computer program. The ultimate goal of a computational model is to resemble human behavior as closely as possible, such that factors affecting the functioning of the program would similarly affect human behavior and vice versa.[11] Reading is an area that has been extensively studied via the computational model system. The dual-route cascaded model (DRC) was developed to understand the dual-route to reading in humans.[11] Some commonalities between human reading and the DRC model are:[5]

The DRC model has been useful as it was also made to mimic dyslexia. Surface dyslexia was imitated by damaging the orthographic lexicon so that the program made more errors on irregular words than on regular or non-words, just as is observed in surface dyslexia.[6] Phonological dyslexia was similarly modeled by selectively damaging the non-lexical route thereby causing the program to mispronounce non words. As with any model, the DRC model has some limitations and a newer version is currently being developed.[11]