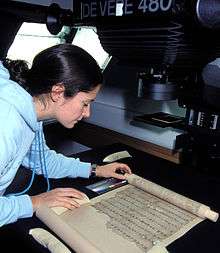 Digitization of a Dunhuang manuscript

The Dunhuang manuscripts are a cache of important religious and secular documents discovered in the Mogao Caves of Dunhuang, China, in the early 20th century. Dating from the 5th to early 11th centuries, the manuscripts include works ranging from history and mathematics to folk songs and dance. There are also a large number of religious documents, most of which are Buddhist, but other religions including Daoism, Nestorian Christianity and Manichaeism are also represented. The majority of the manuscripts are in Chinese. Other languages represented are Khotanese, Sanskrit, Sogdian, Tangut, Tibetan, Old Uyghur language, Hebrew and Old Turkic.[1] The manuscripts are a major resource for academic studies in a wide variety of fields including history, religious studies, linguistics, and manuscript studies.

The documents were discovered in a sealed cave by the Daoist monk Wang Yuanlu on June 25, 1900.[2] From 1907 onwards he began to sell them to Western explorers, notably Aurel Stein and Paul Pelliot. Japanese, Russian and Danish explorers also acquired collections of manuscripts.[3] But largely due to the efforts of the scholar and antiquarian Luo Zhenyu, most of the remaining Chinese manuscripts, perhaps a fifth of the total, were taken to Beijing in 1910 and are now in the National Library of China. Several thousands of folios of Tibetan manuscripts were left in Dunhuang and are now located in several museums and libraries in the region.[4] Those purchased by Western scholars are now kept in institutions all over the world, such as the British Library and the Bibliothèque nationale de France. All of the manuscript collections are being digitized by the International Dunhuang Project, and can be freely accessed online.

Studies of the Dunhuang manuscripts

While most studies use Dunhuang manuscripts to address issues in areas such as history and religious studies, some have addressed questions about the provenance and materiality of the manuscripts themselves. Various reasons have been suggested for the placing of the manuscripts in the library cave and its sealing. Aurel Stein suggested that the manuscripts were "sacred waste", an explanation that found favour with later scholars including Fujieda Akira.[5] More recently, it has been suggested that the cave functioned as a storeroom for a Buddhist monastic library,[6] though this has been disputed.[7] The reason for the cave's sealing has also been the subject of speculation. A popular hypothesis, first suggest by Paul Pelliot, is that the cave was sealed to protect the manuscripts at the advent of an invasion by the Xixia army, and later scholars followed with the alternative suggestion that it was sealed in fear of an invasion by Islamic Kharkhanids that never occurred.[6] As there is no evidence to support either theory, Yoshiro Imaeda has suggested a more pragmatic reason for the sealing of the cave:

Would it not be more natural to assume that during the course of more than one and a half centuries following its excavation old documents were steadily brought into the cave with the result that, even after Hongbian's portrait statue had been moved elsewhere, there was no longer any space for storing further documents, and the cave was sealed when it could no longer function even as a storage room, which occurred in the first half of the eleventh century?[8] 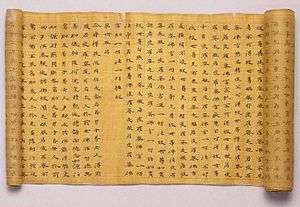 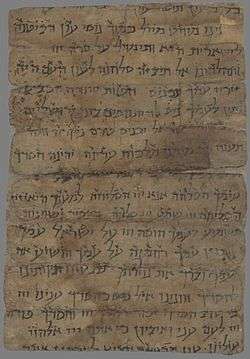 The variety of languages and scripts found among the Dunhuang manuscripts is a result of the multicultural nature of the region in the first millennium AD.[9] The largest proportion of the manuscripts are written in Chinese, both Classical and, to a lesser extent, vernacular Chinese. Most manuscripts, including Buddhist texts, are written in Kaishu or 'regular script', while others are written in the cursive Xingshu or 'running script'. An unusual feature of the Dunhuang manuscripts dating from the 9th and 10th centuries is that some appear to have been written with a hard stylus rather than with a brush. According to Akira Fujieda this was due to the lack of materials for constructing brushes in Dunhuang after the Tibetan occupation in the late 8th century.[10]

By far the largest proportion of manuscripts from the Dunhuang cave contain Buddhist texts. These include Buddhist sutras, commentaries and treatises, often copied for the purpose of generating religious merit.[13] Several hundred manuscripts have been identified as notes taken by students,[14] including the popular Buddhist narratives known as bian wen (變文).[15] Much of the scholarship on the Chinese Buddhist manuscripts has been on the Chan (or Zen) texts, which have revolutionized the history of Chan Buddhism.[16] Among the Tibetan Buddhist manuscripts, the texts of early Tibetan tantric Buddhism, including Mahayoga and Atiyoga or Dzogchen have been the subject of many studies.[17]