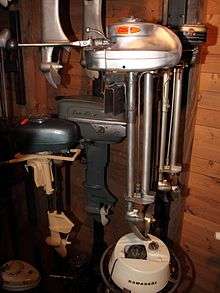 The Elto Outdoor Motor Company (Elto) was the second major outboard motor business founded by Ole Evinrude. Elto outboard engines were produced in the U.S. from 1921 to 1941.

Ole sold his half of the original Evinrude Motor Company to his partner Chris Meyer in 1913 with the condition that Evinrude stay out of the outboard motor business for five years.

Ole Evinrude continued designing motors during this time and developed a new engine that made extensive use of lightweight aluminum. His new twin cylinder design weighed one third less than the Evinrude Motor Co.'s best selling (single cylinder) model and produced 50% more power.

Five years later, in 1920 Ole and his wife Bess decided to re-enter the outboard business with their new design, but still could not use the "Evinrude" name. Instead, they called their new Milwaukee venture the Elto Outboard Motor Co. ELTO was Bess's effort to create a distinctive, one-word brand name like "Kodak." It derived from the first letters of "Evinrude Light Twin Outboard."

In 1928 the ELTO company introduced America's first four cylinder two-cycle outboard motor, the Super Elto Quad, which was capable of speeds over 35 mph. Though still outsold by Johnson, Elto was the industry's most profitable company that year.

Meanwhile, the Evinrude Motor Co. floundered, and in 1929, Stephen Foster Briggs, co-founder of its new owner, Briggs & Stratton Corporation; proposed a merger between the Evinrude Motor Co., the Elto Outboard Motor Co., and the Lockwood Motor Co. of Jackson, Michigan. Eager to regain his namesake company, Evinrude agreed to the deal and became president of the new Outboard Motors Corporation (OMC), headquartered in Milwaukee.

Initially, each of the three companies marketed a complete line of motors, but as the Great Depression eroded sales, a new strategy was called for. "Evinrude" became the premium brand, while "Elto" was positioned as the company's economy line. This streamlining helped the company survive the worst years of the Depression, but with the acquisition of the Johnson Motors Co. in 1935 - one year after Ole Evinrude's death - Elto became something of an orphan within the OMC family.

The 1.1-hp Evinrude Scout, later renamed the Ranger, was introduced in 1938. The ½-hp Evinrude Mate came along less than a year later with a retail price of $34.50.

World War II ended production of civilian models, and the prosperous post-war economy demanded larger, faster, more feature-laden motors. OMC neglected to resume the brand immediately after the war, but did make a brief reintroduction of the name in 1949 based on a pair of economy engines made by OMC's Gale Products.

ELTO outboards were made in a variety of sizes from the Cub, Pal and Ace, to the Ruddertwin and Lightwin.

Produced for only two years, the Elto Cub is an interesting sidelight to the venerable history of the outboard motor industry. Weighing only 8.5 pounds, this .5 horsepower motor was advertised as the "world's lightest outboard" when introduced in 1939. The Elto Cub filled a small niche in the outboard market of the late 1930s. Its price of $29.50 appealed to Depression-stretched pocketbooks. The Cub was suitable only for the lightest duty use because of its light weight.

The Cub was discontinued in 1941 and the "Elto" brand name was not far behind.

This article is issued from Wikipedia - version of the 3/19/2014. The text is available under the Creative Commons Attribution/Share Alike but additional terms may apply for the media files.