For the title in the Peerage of Scotland see: Earl of Orkney 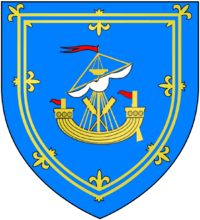 Arms of feudal Earldom of Orkney: Azure, a lymphad at anchor or flagged gules sails furled argent oars erect in saltire within a double tressure flory of the second[1]

The flag of the Earldom of Orkney

The Earldom of Orkney was a Norwegian feudal dignity in Scotland which had its origins from the Viking period. The title of Earl of Orkney was heritable.[2]

Orkney and Shetland, to the north, lie off the northernmost tip of Caithness, Scotland. Picts came to Orkney during the Bronze Age and extant archaeological data shows that certainly, there were people living there prior to the Vikings who came to Orkney, probably by the latter part of the 8th century although this is up for dispute. Norwegian Vikings probably either came to the islands first as farmers who were seeking land or as warriors who were claiming territory and riches as was common with Viking conquests elsewhere. The question of whether the Picts were completely massacred by the settling Vikings, migrated away, or were assimilated, in peaceful coexistence and gentle mergeance, is a matter of contention.[3] However, aside from traces of their lives there, their culture did not endure in the early history or character of Orkney.

By the 12th century, Orkney was under Norwegian control and by the 13th century, the Orkneyingasaga was written in Iceland, providing one of the earliest and most repeated versions of the history of Norse life on these isles. The Orkneyingasaga is largely fictional however and was not, being written in Iceland, any sort of primary source. Instead, it should be culled for historical details with great care and these data should be matched and compared against data from other sources.

Harald I Hårfagre, Harald I of Norway, claimed Orkney and Shetland for his kingdom around 875 and due to political differences and problems had to take military action to secure these isles as realms friendly to his rule at home. Some of his enemies left Orkney for Iceland and perhaps the Faroes. Harald took control of the warrior leaders of Orkney at this point and appointed the jarls, or earls of Orkney, who would be the highest-ranking nobility of the islands and would form the localized government in his stead. The martyrdom of Earl Magnus in 1117 resulted in the building of St Magnus Cathedral, Kirkwall. In 1231, the line of jarls which Harald established became extinct and in the same year, the earldom or mormaerdom of Caithness was given over to Magnus, the son of the Mormaer of Angus, forming the basis for a new governing presence. In 1379 Haakon VI Magnusson granted the earldom to Henry Sinclair

In 1468, the Orkney and Shetland were ceded by Christian I of Denmark and Norway against the unpaid dowry of his daughter Princess Margaret who was betrothed to the Scottish prince James III. Christian I never paid the money owed to James' father and thus the two island groups became part of the Scottish kingdom. The jarldom, without a clear Norse line nor the political support or mechanism for that line to continue, were given over to Scottish lords. In 1471, James gave lands in Caithness to William, the Earl of Orkney, in exchange for his lands, and thus Orkney and Shetland became part of the Kingdom of Scotland.

William Sinclair exchanged the title for that of Earl of Caithness in 1470, moving the connection between these two earldoms back towards the mainland once again.

In 1567 James Hepburn, 4th Earl of Bothwell, husband of Mary, Queen of Scots, was created as the Duke of Orkney. When Mary lost her claim to the throne, her husband also lost his to Orkney and the title was considered extinct.

Robert Stewart was created as the Earl of Orkney and the title revived but his son, Patrick Stewart forfeited the title.

George Hamilton was created as the Earl of Orkney in the third creation of the title in 1696. It is through his family and those families his has married into that the title has survived today.

Life under the Scottish earls—especially after the creation of the second line of Earls of Orkney—over time incorporated aspects of Scottish culture while still keeping in place the Norn language, family names and other distinct aspects of Norse influence on the isles. Today, these influences are still found in Orkney and Shetland, making their character somewhat novel and distinct from that of other parts of Scotland.