An editorial cartoonist, also known as a political cartoonist, is an artist who draws editorial cartoons that contain some level of political or social commentary. Their cartoons are used to convey and question an aspect of daily news or current affairs in a national or international context. Political cartoonists generally adopt a caricaturist style of drawing, to capture the likeness of a politician or subject. They may also employ humor or satire to ridicule an individual or group, emphasize their point of view or comment on a particular event.

The traditional and most common outlet for political cartoonists is the editorial page of a newspaper, or in a pocket cartoon, in the front news section of a newspaper.

Editorial cartoons are not usually found in the dedicated comic section, although certain cartoons or comic strips have achieved crossover status.

Historically, these are quick, hand-drawn ink drawings, scanned and reproduced in black and white and published in print newspapers. The introduction of color came later, and more recently the use of digital drawing tools are a popular and efficient way to produce work quickly for newspaper deadlines.

Editorial cartoonists may reflect the political opinion expressed in the editorial page, or a newspaper in general, but they can also express opposing views, or opt for more populist humor that often reflects the conventional wisdom of the readers.

Historically, these artists have roots in ancient art forms, such as the cave painting of Early Man, or the hieroglyphics of Egypt, in terms of their role in informing society. Cartoonists in many ways take on the role of a court jester, who though employed by a King or ruler, would often mimic and ridicule him and his regime in his performances, to entertain the court, or 'the common man'.

In recent years, the internet has become an excellent means for distributing this kind of short format media, humor, and minority political opinions, leading to a large growth in the popularity of online and alternative editorial cartoons.

The rise of comic journalism online, which combines the longer comic strip format as a means to relay a story in more depth, is very effective in a vertical web format. As visual journalists, they can tell a story in a visual way, with words and images.

Because an editorial cartoonist expresses an idea visually, with little or no text or words, it can be understood across many languages and countries. A strong tradition of editorial cartooning can be found throughout the world, in all kinds of political environments, including Cuba, Australia, Malaysia, Pakistan, India, Iran, France, Denmark, Canada and the United States.

In the United States, there are more than a hundred published editorial cartoonists, from both sides of the Republican-Democrat divide.

In India, the most common and popular form of political commentary is the pocket cartoon. R. K. Laxman, Sudhir Dar, Mario Miranda, E. P. Unny, Shekhar Gurera, Ajit Ninan are some of the popular editorial cartoonists, through their daily pocket cartoons.

A political cartoonist's aim is often to encourage debate; they can also fuel controversy. Their work can expose corrupt or abusive regimes, governments or political groups, and therefore often put themselves and their publishers at risk.

In 2005, Danish cartoonist Kurt Westergaard received numerous death threats and was attacked in his home by man with an axe.

In 2015, the French satirical magazine Charlie Hebdo's offices were attacked by two Islamist gunmen in reaction to publishing cartoons of the Prophet Muhammad. Twelve employees were killed, including staff cartoonists Charb, Cabu, Honoré, Tignous and Wolinski.

The Cartoonists Rights Network International awards the annual Courage in Editorial Cartooning Award to political cartoonists who show bravery and risk their own safety to publish their work. In 2015, this accolade was awarded to Atena Farghadani of Iran, who was jailed for more than 12 years for publishing a cartoon of Iran's parliament with heads of various animals.

There is a Pulitzer Prize awarded every year for America's top editorial cartoonist — as decided by a panel of senior media industry professionals and media academics (see Pulitzer Prize for Editorial Cartooning). Other major awards given each year to editorial cartoonists include the Association of American Sigma Delta Chi Award from the Society of Professional Journalists, the Thomas Nast Award from the Overseas Press Club, and the Herblock Prize.

Cartoonists Rights Network International helps cartoonists who are exiled, jailed or in danger of persecution. 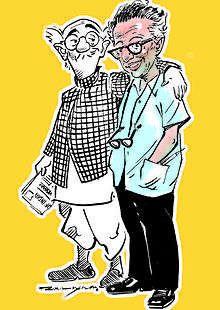 There are several North American books that have collected together the majority of cartoonists being published at the time. Attack of the Political Cartoonists, written by J. P. Trostle, was published in 2004 and includes profiles of 150 mainstream American and Canadian cartoonists. Attack was an effort to update the 1962 tome Today's Cartoon, by New Orleans States-Item cartoonist John Chase, which included most of the editorial cartoonists working in the U.S. at the height of the Cold War. And the 3-volume Attitude series includes some of the political cartoonists who have appeared in alternative newspapers and online — see Attitude: The New Subversive Cartoonists.