Education in the Palestinian territories 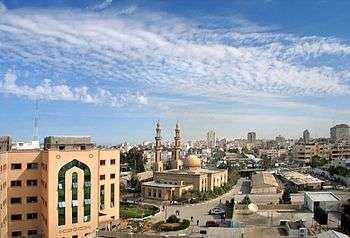 Education in the Palestinian territories refers to the educational system in Gaza and the West Bank administered by the Palestinian Ministry of Education and Higher Education. Enrollment rates amongst Palestinians are relatively high by regional and global standards. According to a youth survey in 2003, 60% between the ages 10–24 indicated that education was their first priority. Youth literacy rate (the ages 15–24) is 98.2%, while the national literacy rate is 91.1%[1] Enrollment ratios for higher education were 46.2% in 2007, among the highest in the world.

There are three types of schools from perspective of gender in the Palestinian territories: boys’ schools (37%), girls’ schools (35%), and co-educational schools (29%).[2]

In the Palestinian territories education system, compulsory basic education includes Grades 1 to 10 and this is divided into the preparatory stage (Grades 1 to 4) and the empowerment stage (Grades 5 to 10). Secondary education (general secondary education and a few vocational secondary schools) covers Grades 11 and 12. In tertiary education, there are 11 universities (10 private and one public) and 11 technical colleges (4 Palestinian Authority, 2 UNRWA, 4 public and 1 private), all of which mainly offer four-year courses. Additionally, there are 19 community colleges (1 Palestinian Authority, 9 public, 2 UNRWA, and 7 private) that mainly offer two-year diploma courses in technical and commercial specializations.[3]

The first refugee camp schools for were established by the Red Cross in 1949.[4] First UNRWA elementary six-year schools befun in 1959-60 school year.[5] UNRWA schools offer Grades 1 to 10 and do not provide secondary education (Grade 11 and 12). UNRWA’s education provision has played a major role in Palestinian territories education since 1967[6] 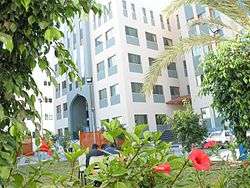 Education in Palestinian territories is centralized in regard to its curriculum, textbooks, instructions, and regulations. The administrative structure of the general education is composed of 22 fields’ directorates (districts offices) of education, including 16 in the West Bank and 6 in Gaza[2]

The mission of the MOEHE is 1) to ensure education for all, 2) improve its quality and its standards, and 3) to ultimately develop citizens with sound and balanced characters[7]

Funding for the education system comes from the government budget through the Ministry of Finance [2] Government expenditure on education as % of total government expenditure is 17.9 in 2003 [8] The remaining funding in education comes from donors and international organizations[2] In Palestine territories, access to schools is primarily constrained by physical conditions and movement restrictions. However, insufficient investment in upgrading education has led to crowding and deterioration in the learning environment. Schools have lost their revenue base from fees, and faced difficulties in securing basic school supplies and materials. The limited services for students with special needs, facing psychological trauma, has also become evident. The inequity in resource allocation between the West Bank and the Gaza Strip has become serious as well.[9]

A formal sector plan was not developed until five years after the creation of the MOEHE but this does not mean that planning was ignored until then. A formal five-year plan was first discussed in 1998, and it took more than a year to prepare. UNESCO International Institute for Educational Planning (IIEP) provided technical assistance in developing the plan, and the MOEHE set up two working teams; one focused on policy and another worked the details. Five-Year Education Development Plan 2000-2005 had five goals: 1) to provide access to education for all children, 2) to improve the quality of education, 3) to develop formal and non-formal education, 4) to develop management capacity in planning, administration, finance, and 5) to develop human resources across the education system.[10]

Education Development Strategic Plan (EDSP) 2008–2012 has four goals: 1) to increase access of school-aged children and students of all education levels and improve the ability of the education system to retain them (Access), 2) to improve the quality of teaching and learning (Quality), 3) to develop the capacity for planning and management and to improve the financial and management systems used (Management), and 4) to realize a gradual conversion of the higher education sector from a supply-oriented to a demand-oriented sector, which will gradually guarantee more compatibility between higher education outputs and labor market(s) need from qualitatively and quantitatively (Relevance). Goal 1 to 3 is for pre-school, general, non-formal, higher education, and vocational education, and Goal 4 is only for higher education and vocational education.[7]

Pre-primary education is for children, usually starting at 4 years and up to the age of 6 years. According to the 2004/2005 PCBS Educational Institutions Census, there were approximately 898 private kindergartens, and only 3 operated by the Palestinian Authority. (WB and BCRD 2006) Although most kindergartens are private, the MOEHE provides technical and educational supervision, teacher training and licensing, and some funding[2]

The number of male and female children was roughly equal, and most kindergartens have co-educational system.[1] Gross enrollment ratios for pre-primary education are 29.9% for total, 30.3% for boys, and 29.5% for girls [11]

There is no grading system (marks) or written tests in Grade 1 to 4. Teachers assess students on the basis of their progress through formative assessments, observations, student portfolios, and other assigned student work as the basis of their graduating judgment[2]

There is a graduating examination in Grade 9. This examination is offered to students who have not completed Grade 9 or have left school and want to achieve a Grade 9 competency level equivalent to the Certificate of General Secondary Education Examination[2] Palestinian students at Grade 8 participated in TIMSS in 2003 and 2007. The score for mathematics test was 390 in 2003 and 367 in 2007 [13] The score for science test was 435 in 2003 and 404 in 2007[14]

Secondary education consists of two years, and includes an academic and a vocational program. (MOEHE 2005b) Students are able to select either of these programs, but their right to entry is based on successful completion of Grade 10 based on the results of their final assessments[2] 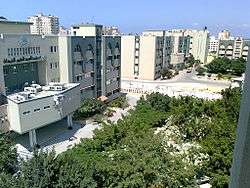 The university education consists of four years college education to obtain a bachelor's degree and additional two years for a master's degree. Some colleges provide two years of education for a diploma course.[2] During 2005 in the West Bank and Gaza, there were 10 universities, 1 distance education university (Al-Quds Open University), 13 university colleges, and 19 community colleges.[15] Most of these universities were established and developed mostly since the period of Israel occupation begun in 1967. Majority of the universities are non-profit institutions. They combine fund-raise with funding received from the Palestinian Authority.[16]

More students enrolled in certain academic programs such as social science, education, and humanities and arts in higher education, and the share of science and engineering is proportionately less.[15]

Demand for tertiary education has increased significantly in the past decade with students enrolled in tertiary education institutions more than tripling between 1995 and 2006. Some academics have suggested that Palestinian Authority higher education system needs to not only satisfy the increasing demand from the growing population of secondary education graduates, but also to maintain quality and relevance to meet the changing demands of the global economy. In addition, public financing for tertiary education is considered insufficient given Palestinian Authority financial circumstances. The system heavily depends on student fees, which represent 60% of universities’ operating costs.[17]

The MOEHE has developed a new student loan scheme for tertiary education. The objectives of this loan scheme are: 1) to create a sustainable resource that will assist students into the future, 2) to ensure that students understand their responsibility to share the cost of their education, 3) to provide a strong, streamlined repayment system that is easy and fair (repayments of loans must be collected from all students), and 4) to provide a collection mechanism that will ensure sustainability (a revolving fund) [17]

UNESCO states that because of "isolation, [the Universities] have suffered in particular from the absence of research departments."

"Inter-university co-operation programmes are underway, such as TOKTEN, PEACE and MEDCAMPUS. They are supported by partners such as the European Union, UNESCO and the UNDP. The PEACE programme (Palestinian-European Academic Co-operation in Education) involves 23 Palestinian Authority and European universities. It has been particularly noteworthy for having allowed students and teachers from the West Bank and Gaza to be admitted to European faculties at a time when the university establishments of Gaza and the West Bank were closed. In a second phase, it is to provide for the dispatch of missions of volunteer academics, on sabbatical, from Europe, North America and the rest of the world to the West Bank and Gaza."[18] "Palestinian students wishing to obtain a doctorate must study either in Israel, or overseas."[19]

Technical and Vocational Education and Training(TVET)

Formal vocational education starts after basic education and lasts two years. After graduation, students can join university colleges(diploma in 2 years or Bachelor in 4 years) or colleges(2 years).[20] There are five streams in school-based vocational training: industrial, agricultural, commercial, hotel and home economics. Fifteen secondary industrial schools offer 17 specializations and 2,185 students are enrolled in 2004/05. All but three of these industrial schools are funded by government. Sixty four academic secondary schools offer commercial subjects and nearly 3,000 students are enrolled. The two hotel training schools are private. Total students enrollment for the five streams increased from around 3,000 in 1999/2000 to 5,561 in 2004/05. This is considerably lower than the MOEHE 2000-2005 target (9,000 students enrollment). This is partly because this type of training remains unpopular among most students and parents/guardians.[2]

The demand for most vocational training is weak. A few community colleges with limited capacity of 200-300 students have high applicant-place ratio (especially for nursing and the UNRWA Gaza Training Centre). The rest of community colleges have only around one applicant-place ratio. Manual skilled occupations continue to have low status and only the least academically able students are expected to enroll at TVET institutions. The majority of colleges have low student-teacher ratios and high unit cost.[3]

In addition to community colleges, the Ministry of Labor and Social Affairs provides other TVET opportunities. Twelve Rehabilitation Centers that target dropouts, slow learners are run by this Ministry. Total enrollments were around 850 in 2004/05 with 380 graduates. The Ministry of Ex-Detainees also offers TVET to around 1,000 students and most of them are males. Four hundred fifty students are enrolled in the National Institute of Information Technology.[3] The ministry also handles TVET centres (enrollment: 6600 students, which offer curriculum in trade (2 years), technical/semi-professional (2 years) and certificate courses (1 –2 years). Besides, The UNRWA provides short-term courses (8–40 weeks).[20]

A unified curriculum was applied in both the West Bank and the Gaza after using curriculum from other nations for a long time. The implementation phase of the national curriculum began by implementing national textbooks in all subjects in 2000. The textbooks were first implemented in Grade 1 and Grade 6, followed by textbooks for Grade 2 and Grade 7 in 2001. By the beginning of the 2006-2007, all students in all grades were using the Palestinian national textbooks [2]

UNRWA has been the main provider of basic education to Palestinian refugee children since 1950. Basic education is available to all registered refugee children free of charge up to around the age of 15. By 31 December 2009, there were close to 482,000 students enrolled in 691 schools.[21] UNRWA schools follow the curriculum of their host countries. This allows UNRWA pupils to progress to further education or employment holding locally recognised qualifications and fits with the sovereignty requirements of countries hosting refugees.[22]

In the 1960s UNRWA schools became the first in the region to achieve full gender equality. Overcrowded classrooms containing 40 or even 50 pupils are common. Almost all of UNRWA's schools operate on a double shift - where two separate groups of pupils and teachers share the same buildings. Not all refugee children attend UNRWA schools. In Jordan and Syria children have full access to government schools and many attend those because they are close to where they live. UNRWA also operates eight vocational and technical training centres and three teacher training colleges that have places for around 6,200 students.

Elias H.Tuma, Haim Darin-Drabkin, The Economic Case for Palestine, Croom Helm, London 1978 p. 48. (respectively, Professor of Economics at Cal-U, Davis, and Director of the Institute for Land Resource Planning, at Tel Aviv and consultant for the UN)