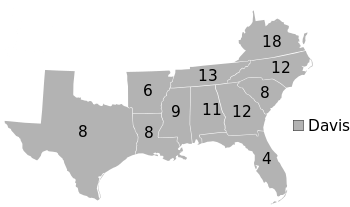 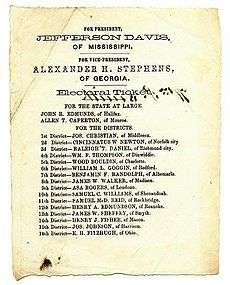 The President and Vice President were not elected directly by the voters. Instead, they were elected by electors who were chosen by popular vote on a state-by-state basis. This system was established by the Confederate States Constitution, in emulation of the United States Constitution. Like the U.S. Constitution, the Confederate Constitution provided that each state would have a number of electors "equal to the whole number of Senators and Representatives to which the State may be entitled in the Congress" (Article II, Section 1).

Only one election was ever held, in 1861. In that election, the Electoral College consisted of 109 electors.[1] The electors (chosen in the November elections) met in their respective states to cast their votes on December 4, 1861 (Confederate law mandated that electors meet on the first Wednesday in December).[2]

This article is issued from Wikipedia - version of the 8/26/2015. The text is available under the Creative Commons Attribution/Share Alike but additional terms may apply for the media files.