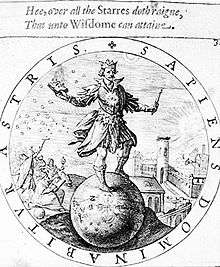 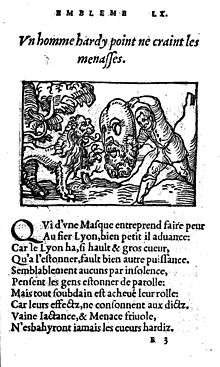 An emblem book is a book collecting emblems (allegorical illustrations) with accompanying explanatory text, typically morals or poems. This category of books was popular in Europe during the 16th and 17th centuries.

But if someone asks me what Emblemata really are? I will reply to him, that they are mute images, and nevertheless speaking: insignificant matters, and none the less of importance: ridiculous things, and nonetheless not without wisdom [...]
— Jacob Cats, Voor-reden over de Proteus, of Minne-beelden, verandert in sinne-beelden.[1]

Scholars differ on the key question of whether the actual emblems in question are the visual images, the accompanying texts, or the combination of the two. This is understandable, given that the first emblem book, the Emblemata of Andrea Alciato, was first issued in an unauthorized edition in which the woodcuts were chosen by the printer without any input from the author, who had circulated the texts in unillustrated manuscript form. Some early emblem books were unillustrated, particularly those issued by the French printer Denis de Harsy. With time, however, the reading public came to expect emblem books to contain picture-text combinations. Each combination consisted of a woodcut or engraving accompanied by one or more short texts, intended to inspire their readers to reflect on a general moral lesson derived from the reading of both picture and text together. The picture was subject to numerous interpretations: only by reading the text could a reader be certain which meaning was intended by the author. Thus the books are closely related to the personal symbolic picture-text combinations called personal devices, known in Italy as imprese and in France as devises.

Emblem books, both secular and religious, attained enormous popularity throughout continental Europe, though in Britain they did not capture the imagination of readers to quite the same extent. The books were especially numerous in the Netherlands, Belgium, Germany, and France.

Many emblematic works borrowed plates or texts (or both) from earlier exemplars, as was the case with Geoffrey Whitney's Choice of Emblemes, a compilation which chiefly used the resources of the Plantin Press in Leyden.

Early European studies of Egyptian hieroglyphs, like that of Athanasius Kircher, assumed that the hieroglyphs were emblems, and imaginatively interpreted them accordingly.

A similar collection of emblems, but not in book form, is Lady Drury's Closet.