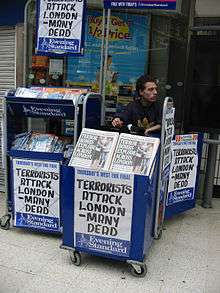 Headlines of the Evening Standard on the day of London bombing on 7 July 2005, in Waterloo Station

It is the dominant local/regional evening paper for London and the surrounding area, with coverage of national and international news and City of London finance. In October 2009, the paper ended a 180-year history of paid circulation and became a free newspaper, doubling its circulation as part of a change in its business plan.[2]

The newspaper was founded by barrister Stanley Lees Giffard on 21 May 1827, as the Standard.[3] The early owner of the paper was Charles Baldwin. Under the ownership of James Johnstone, The Standard became a morning paper from 29 June 1857. The Evening Standard was published from 11 June 1859. The Standard gained eminence for its detailed foreign news, notably its reporting of events of the American Civil War (1861–1865), the Austro-Prussian War of 1866, and the Franco-Prussian War of 1870, all contributing to a rise in circulation.[4] By the end of the 19th century, the evening edition eclipsed its morning counterpart, which folded.

At the turn of the century it was owned by Sir Edward Hulton, who decided to make the paper compete with the fledging Daily Mail. He also introduced the gossip column Londoner's Diary, originally billed as "a column written by gentlemen for gentlemen". In 1923, Lord Beaverbrook, owner of the Daily Express, bought Hulton's newspapers, although he sold them shortly thereafter to the Mail's owner Lord Rothermere, with the exception of the Standard. It became a staunchly Conservative paper, harshly attacking Labour in 1945 in a high-profile campaign that ultimately backfired. In the 1960s the paper was now upstaged by the Evening News, which sold over 1 million copies nightly. During the decade, the paper also began to publish the comic strip Modesty Blaise that bolstered the paper's sales throughout the 1970s.

On 21 January 2009, the Russian businessman and former KGB agent Alexander Lebedev and his son Evgeny Lebedev, owners of The Independent, agreed to purchase control of the newspaper at £1 for 64 percent ownership.[5][6] A few years earlier, 12 percent of the paper was sold to Justin Shaw and Geordie Greig. Associated News keeps the remaining 24 percent.

In November 2009, it was announced that the London Evening Standard would drop its midday "News Extra" edition from 4 January 2010 with the first edition being the West End Final, available from 2 pm.[7] One edition of 600,000 copies would be printed starting at 12:30 pm, ending 3 am starts for journalists and the previous deadline of 9 am for the first edition; twenty people were expected to lose their jobs as a result.[7]

Previously there were three editions each weekday, excluding Bank holidays. The first, "News Extra", went to print at 10:00 am and was available around 11 am in central London, slightly later in more outlying areas (such as Kent). A second edition, "West End Final", went to print at 3 pm, and the "Late Night Final" went to print at 5 pm and was available in the central area from about 6 pm There was often considerable variation between the editions, particularly with the front page lead and following few pages, including the Londoner's Diary, though features and reviews stayed the same. The page changes were indicated by stars in the bottom left-hand corner of each page: two stars for the second edition, three stars for the third. In January 2010, circulation was increased to 900,000.

In May 2009, the newspaper launched a series of poster ads, each of which prominently featured the word "Sorry" in the paper's then-masthead font. These ads offered various apologies for past editorial approaches, such as "Sorry for losing touch".[8] None of the posters mentioned the Evening Standard by name, although they featured the paper's Eros logo. Ex-editor Veronica Wadley criticised the "Pravda-style" campaign saying it humiliated the paper's staff and insulted its readers.[9] The campaign was designed by McCann Erickson. Also in May 2009 the paper relaunched as the London Evening Standard with a new layout and masthead, marking the occasion by giving away 650,000 free copies on the day,[10] and refreshed its sports coverage.[11]

After a long history of paid circulation, on 12 October 2009 the Standard became a free newspaper,[2][12] with free circulation of 700,000, limited to central London. In February 2010, a paid-for circulation version became available in suburban areas of London for 20p (although many places sell it for 50p).[13][14] The newspaper won the Media Brand of the Year and the Grand Prix Gold awards at the Media Week awards in October 2010.[15] The judges said, "[the Standard has] quite simply ... stunned the market. Not just for the act of going free, but because editorial quality has been maintained, circulation has almost trebled and advertisers have responded favourably. Here is a media brand restored to health."[15] The Standard also won the daily newspaper of the year award at the London Press Club Press Awards in May 2011.[16]

The Evening Standard, although a regional newspaper for London, also covers national and international news, though with an emphasis on London-centred news (especially in its features pages), covering building developments, property prices, traffic schemes, politics, the congestion charge and, in the Londoner's Diary page, gossip on the social scene. It also occasionally runs campaigns on local issues that national newspapers do not cover in detail.

It has a tradition of providing arts coverage. Its most well known visual art critic is the late Brian Sewell. Sewell was noted for his acerbic view of conceptual art, Britart and the Turner Prize[19] and his views attracted controversy and criticism in the art world.[20] He has been described as "Britain's most famous and controversial art critic".[21]

On 5 May 2015, an editorial stated that the newspaper would again be supporting David Cameron and the Conservatives in the 2015 General Election, saying that the Conservatives have "shown themselves to be good for London."[24] The newspaper did however also claim "there may be good tactical reasons to vote Liberal Democrat."[24]

A study conducted by the Media Reform Coalition (MRC) and Goldsmiths University of London argued that, in the 2016 elections for the new Mayor of London, the London Evening Standard was the "mouthpiece of the Conservative Party", according to MRC chair Justin Schlosberg.[25] Schlosberg accused the Standard of being

"systematically biased in the way that headlines and news stories were framed, selected and prioritised. This is all the more concerning because bias was concentrated in relatively prominent headlines and in news reports where readers are less likely to expect opinion to be mobilised."

There were almost twice as many positive headlines about the Conservative candidate, Zac Goldsmith, than for his Labour rival, Sadiq Khan, with stories exhibiting the strongest bias against Khan also being the most prominent. 13 out of 15 official press releases from the Goldsmith campaign in the two months to 12 April were published as news stories in the paper, "reproducing headlines from the news release virtually verbatim", according to the study.[25] 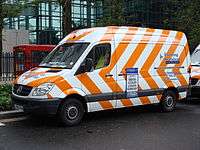 On 14 December 2004, Associated Newspapers launched a Monday–Friday freesheet edition of the Evening Standard called Standard Lite to help boost circulation. This had 48 pages, compared with about 80 in the main paper, which also had a supplement on most days.[26]

In August 2006, the freesheet was relaunched as London Lite. It was designed to be especially attractive to younger female readers, and featured a wide range of lifestyle articles, but less news and business news than the main paper. It was initially only available between 11.30 a.m. and 2.30 p.m. at Evening Standard vendors and in the central area, but later became available in the evening from its street distributors.[27] With the sale of the Evening Standard, but not the London Lite, to Alexander Lebedev on 21 January 2009, the ownership links between the Standard and the Lite were broken.[28]

On Fridays, the newspaper includes a free glossy lifestyle magazine, ES (originally the Evening Standard Magazine, circulating on Saturdays until 1974), and the circulation was increased to 350,000 in September 2014. This has moved from more general articles to concentrate on glamour, with features on the rich, powerful and famous. On Wednesdays, readers can pick up a free copy of the Homes & Property supplement, edited by Janice Morley, which includes London property listings as well as articles from lifestyle journalists including Barbara Chandler, Katie Law and Alison Cork.

An entertainment guide supplement Metro Life (previously called Hot Tickets) was launched in September 2002. This was a what's-on guide with listings of cinemas and theatres in and around London, and was given away on Thursdays. It was discontinued on 1 September 2005.

The paper also supplies occasional CDs and DVDs for promotions. It also give Londoners a chance to win exclusive tickets to film premieres and sports tournament tickets, such as the Wimbledon Ladies Singles Final.

The newspaper's This Is London website carries some of the stories from the Evening Standard and promotions, reviews and competitions. It also includes a number of blogs by Evening Standard writers, such as restaurant critic Charles Campion, theatre critic Kieron Quirke and music critic David Smyth. A separate website contains images of each page of the print edition (two versions) and supplements.