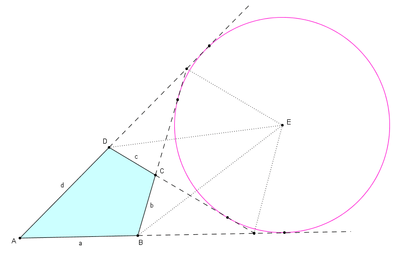 For the purpose of calculation, a more useful characterization is that a convex quadrilateral with successive sides a, b, c, d is ex-tangential if and only if the sum of two adjacent sides is equal to the sum of the other two sides. This is possible in two different ways—either as

This was proved by Jakob Steiner in 1846.[5] In the first case, the excircle is outside the biggest of the vertices A or C, whereas in the second case it is outside the biggest of the vertices B or D, provided that the sides of the quadrilateral ABCD are a = AB, b = BC, c = CD, and d = DA. A way of combining these characterizations regarding the sides is that the absolute values of the differences between opposite sides are equal for the two pairs of opposite sides,[4]

If opposite sides in a convex quadrilateral ABCD intersect at E and F, then

The implication to the right is named after L. M. Urquhart (1902–1966) although it was proved long before by Augustus De Morgan in 1841. Daniel Pedoe named it the most elementary theorem in Euclidean geometry since it only concerns straight lines and distances.[6] That there in fact is an equivalence was proved by Mowaffac Hajja,[6] which makes the equality to the right another necessary and sufficient condition for a quadrilateral to be ex-tangential.

Comparison with a tangential quadrilateral

The notations in this table are as follows: In a convex quadrilateral ABCD, the diagonals intersect at P. R1, R2, R3, R4 are the circumradii in triangles ABP, BCP, CDP, DAP; h1, h2, h3, h4 are the altitudes from P to the sides a = AB, b = BC, c = CD, d = DA respectively in the same four triangles; e, f, g, h are the distances from the vertices A, B, C, D respectively to P; x, y, z, w are the angles ABD, ADB, BDC, DBC respectively; and Ra, Rb, Rc, Rd are the radii in the circles externally tangent to the sides a, b, c, d respectively and the extensions of the adjacent two sides for each side.

An ex-tangential quadrilateral ABCD with sides a, b, c, d has area

Note that this is the same formula as the one for the area of a tangential quadrilateral and it is also derived from Bretschneider's formula in the same way.

The exradius for an ex-tangential quadrilateral with consecutive sides a, b, c, d is given by[4]

If an ex-tangential quadrilateral also has a circumcircle, it is called an ex-bicentric quadrilateral.[1] Then, since it has two opposite supplementary angles, its area is given by

which is the same as for a bicentric quadrilateral.

If x is the distance between the circumcenter and the excenter, then[1]

From this formula it follows that

which means that the circumcircle and excircle can never intersect each other.