The Football Association Challenge Vase, usually referred to as the FA Vase is an annual football competition for teams playing below Step 4 of the English National League System. For the 2013–14 season 535 entrants were accepted, with two qualifying rounds preceding the six proper rounds, semi-finals (played over two legs) and final to be played at Wembley Stadium.

The 2016 winners were Morpeth Town, who beat Hereford 4–1 at Wembley Stadium. 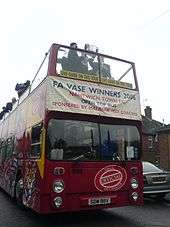 Nantwich Town celebrate winning the Vase after beating Hillingdon Borough in the final in 2006.

Until 1974, football players were either professionals or amateurs. Professionals were paid to play by their clubs, and the only cup competitions such clubs were allowed to enter were the FA Cup and after 1969, for clubs outside The Football League, the FA Trophy. Amateurs, on the other hand, did not get paid (at least not officially) by their clubs, and such clubs had their own cup competition, the FA Amateur Cup.

In 1974, with many of the top amateur players receiving payment for playing, The Football Association abolished the distinction, scrapped the Amateur Cup and introduced the FA Vase for the majority of clubs who had previously played in the competition. Well over 200 clubs entered in the first season, 1974–75 and Hoddesdon Town of the Spartan League beat Epsom & Ewell of the Surrey Senior League 2–1 in the final at Wembley Stadium before a crowd of 9,000.

Whitley Bay take on Abbey Hey in an FA Vase match in 2008.

In recent years, entry to the FA Vase has been restricted to clubs in the ninth and lower tiers of the English football league system, (those in the four levels above qualified for the FA Trophy). Reorganization of the National League System for 2004 onwards moved the dividing line down to the new "Step 5" (ninth tier overall). Clubs from the Channel Islands (First Tower United, St. Martins and Vale Recreation) and the Isle of Man (Douglas HSOB) also entered the Vase in the past. Guernsey F.C., who were formed in 2011 and played in the "Step 5" Combined Counties League, gained entry for the 2012–13 season[2][3] and reached the semi-finals.

Only five teams have managed to win the FA Vase more than once. Whitley Bay are the first team to win the FA Vase three times in successive seasons. Two FA Vase winners, Forest Green Rovers and Tamworth, have gone on to play in the National League at the top level of the non-league pyramid. No FA Vase winner has yet reached the Football League, although 2008–09 finalists Glossop North End had briefly competed in the old First Division over a hundred years earlier, and 1985 finalists Fleetwood Town were promoted to the Football League in 2012 after winning the Conference, though they were reformed in 1997.

BT Sport showed the 2016 FA Vase Final between Hereford and Morpeth Town live on 22 May as part of a double-header along with the 2016 FA Trophy Final.[4]