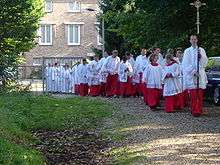 The evolution of the ministry of altar servers has a long history. In the early Church, many ministries were held by men and women. By the early Middle Ages, some of these ministries were formalized under the term "minor orders" and (along with the diaconate) used as steps to priestly ordination. One of the minor orders was the office of acolyte. Formerly, it was strictly forbidden to have women serving near the altar within the sacred chancel (infra cancellos), that is, they were prohibited from entering the altar area behind the altar rails during the liturgy, except to clean or in convents of nuns.[1] In his encyclical Allatae Sunt of 26 July 1755, Pope Benedict XIV explicitly condemned females serving the priest at the altar with the following words:

Pope Gelasius in his ninth letter (chap. 26) to the bishops of Lucania condemned the evil practice which had been introduced of women serving the priest at the celebration of Mass. Since this abuse had spread to the Greeks, Innocent IV strictly forbade it in his letter to the bishop of Tusculum: "Women should not dare to serve at the altar; they should be altogether refused this ministry." We too have forbidden this practice in the same words in Our oft-repeated constitution Etsi Pastoralis, sect. 6, no. 21.[2]

The references to "the Greeks" pertains to the Orthodox practice of ordaining women as deacons. With the practice of private Masses (Mass by a priest and one other person, often offered for a deceased person), scandal was an additional reason not to have a woman or girl alone with a priest. However, it has been customary in convents of women for nuns to perform the ministry of acolyte without being formally professed in that minor order. So in a sense, women were the first altar servers as it was only at the beginning of the modern era when it became customary for men, particularly young boys, to substitute for acolytes in parish churches without being professed in minor orders. This practice was needed when the Council of Trent developed the seminary system where men in minor orders would go away to schools for training to be a priest rather than study under a parish priest.

Around the time of the Second Vatican Council, some dioceses without authorization allowed girls in the lay ministry of altar servers. For example, this practice started as early as 1965 in Germany. The Vatican sought to put an end to such experimentation with the 1970 instruction Liturgicae instaurationes,[3] and affirmed that only males could serve the priest at the altar.[4] However, the practice nonetheless continued in some places, and the Vatican reaffirmed the prohibition against female altar servers in the 1980 instruction Inaestimabile donum.[5]

With the promulgation of the 1983 Code of Canon Law, some argued that this reservation to males no longer held,[6] based on the inclusion of both males and females in canon 230 §2: "Lay persons can fulfil the function of lector in liturgical actions by temporary designation. All lay persons can also perform the functions of commentator or cantor, or other functions, according to the norm of law." In some dioceses, females were allowed to act as altar servers under the "new canon law", without any explicit clarification on the matter from the Holy See.

The clarification came in the form of a circular letter[7] from the Congregation for Divine Worship and the Discipline of the Sacraments to presidents of episcopal conferences on 15 March 1994, which announced a 30 June 1992 authentic interpretation (confirmed on 11 July 1992 by Pope John Paul II) from the Pontifical Council for the Interpretation of Legislative Texts. This authentic interpretation said that canon 230 §2 states that service at the altar is one of the liturgical functions that can be performed by both lay men and women. The circular letter, written by the cardinal-prefect of the Congregation, also clarified that canon 230 §2 has a permissive and not a prescriptive character, that is, it allows, but does not require, the use of female altar servers. Thus it was for each diocesan bishop to decide whether to allow them in his diocese.

A later document, from 2001,[8] made clear that, even if a bishop decided to permit female altar servers, the priest in charge of a church in that diocese was not obliged to accept them, since there was no question of anyone, male or female, having a right to become an altar server. Furthermore, the document states that: it will always be very appropriate to follow the noble tradition of having boys serve at the altar.[8] This tradition has been maintained by most dioceses in the non-Western world, traditionalist Catholics, in some clerical societies, especially with regards to those who practice the Tridentine form of Mass.

Pope Benedict XVI has had female altar servers in Papal masses in London (2010), Berlin, and Freiburg (2011).

In the United States all but one Roman Catholic diocese, the diocese of Lincoln, Nebraska, have allowed both men and women of the lay faithful to be altar servers.[9]

In August 2011, it was announced that "girls no longer will be allowed as altar servers during Mass at the cathedral of the Roman Catholic Diocese of Phoenix, SS. Simon and Jude." John Lankeit, rector of the cathedral, said he "made the decision in hopes of promoting the priesthood for males and other religious vocations, such as becoming a nun, for females". [10]