For the part of an automobile designed to absorb minor impacts, see Bumper (automobile). Fender is the American English term for the part of an automobile, motorcycle or other vehicle body that frames a wheel well (the fender underside). Its primary purpose is to prevent sand, mud, rocks, liquids, and other road spray from being thrown into the air by the rotating tire. Fenders are typically rigid and can be damaged by contact with the road surface. Instead, flexible mud flaps are used close to the ground where contact may be possible.

Sticky materials such as mud may adhere to the smooth outer tire surface, while smooth loose objects such as stones can become temporarily embedded in the tread grooves as the tire rolls over the ground. These materials can be ejected from the surface of the tire at high velocity as the tire imparts kinetic energy to the attached objects. For a vehicle moving forward, the top of the tire is rotating upward and forward, and can throw objects into the air at other vehicles or pedestrians in front of the vehicle.

In British English, the fender is called the wing (this usually refers only to the panels over the front wheel arches, in modern cars, since the rear 'fenders' are more an integral part of the car's body shape). The equivalent component of a bicycle or motorcycle, or the "cycle wing" style of wing fitted to vintage cars, or over tires on lorries which is not integral with the bodywork, is called a mudguard in Britain, as it guards other road users - and in the case of a bicycle or motorcycle, the rider as well - from mud, and spray, thrown up by the wheels.

In modern Indian and Sri Lankan English usage, the wing is called a mudguard. However, the term mudguard appears to have been in use in the U.S. at one point. The American author E.B. White, in an October 1940 Harper's essay, Motor Cars, refers to "...mudguards, or 'fenders' as the younger generation calls them."[1]

In German, it is known as a Kotflügel (mud wing).

In the United States, a minor car accident is often called a "fender bender".

In current US auto industry nomenclature, usually only the panels over the front wheels are called fenders. The auto industry changed from rear fenders bolted onto a quarter panel to an enlarged welded-on quarter panel that fulfilled both functions. This resulted in one piece where there had previously been two, and name of the larger welded piece, the quarter panel, survived the consolidation.

The bolted panel which covers the wheel on dual rear wheel pickup trucks is called a fender. A pickup truck with a separate bed but without bolt on fenders has a bedside, which performs the function of a fender. When the side of the bed is welded to the cab, as with the Cadillac Escalade and Chevrolet Avalanche, it is called a quarter panel.

While the standard of bolted versus welded normally applies, there are some exceptions. Although attached by welding, the panels over the front wheels on cars such as the early 60s Lincoln Continental, the Corvair, and the early 60s Chrysler Imperial are called fenders. Similarly, even though bolted on, the panels covering the rear wheels on the Saturn S series are called quarter panels.

The terms have evolved to be determined mostly based on location. Fenders are at the front. Quarter panels are at the rear, with an exception made for dual rear wheel trucks, where the panel at the rear is called a fender. For vehicles with a narrow car body that exposes the tire, the fender is an exposed curve over the top of the tire. For wide body vehicles that cover the tire, the fender forms the wheel well surrounding the tire, and is not directly visible from above the car body. 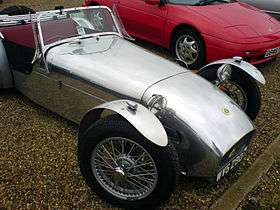 Wheel wells tend to be much larger than the diameter of the tire, because they do not move with the tire suspension and consequently must be large enough to allow the full range of tire motion on the suspension without touching the interior of the wheel well. More elaborate designs include fender skirts for enclosing the outside edge of the wheel well, and stylized pontoon fenders for exposed fenders.

A common accessory on pick up trucks are fender flares, which blocks mud and stones and/or covers rust. They are sometimes used by manufacturers on models that have wider tires than basic models. Using this method, the manufacturer can provide the needed tire coverage without producing a different fender, bed side, or quarter panel for what may be a low-production model.

Fender flares are used on SUVs, pickup trucks, off-road vehicles, and sport cars. They either come with a vehicle as a standard equipment or added afterwards as an aftermarket accessory. Fender flares are often made of fiberglass or ABS plastic to ensure flexibility and light weight, however some trucks and SUVs come with metal fender flares to ensure better durability. There are 3 common styles of fender flares: OE style (Narrow flares with smooth surface), bolt-on (wider fender flares with exposed bolts) and Cut-Out (oversized flares that require a fender trim). The primary purpose of the Cut-Out fender flares[2] is to protect larger off-road tires from debris on and off the road. However, some truck and SUV enthusiasts install them to provide more aggressive look to their vehicles. The most important characteristic of a fender flare is the width as it shows the tire coverage. Common fender flares are 1"- 8" wide.

Certain types of cars with narrow bodies, such as the Lotus and later Caterham Seven or the Allard J2, use what are called cycle fenders in the US or cycle wings in Britain, for their resemblance to those used on bicycles. They are attached to the wheel suspension and remain at a fixed distance from the tire regardless of wheel motion, and can therefore be much closer to the tire than fixed wheel wells. This was popular on early Classic Trials cars because the fenders were lightweight and allowed for a thin streamlined body. They persist on cars wanting a "vintage" look. 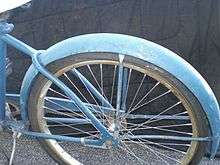 There are generic fenders for bicycles that can be fitted to most bicycle frames. These catch and redirect road spray thrown up by the tires, allowing the rider to remain clean. They are increasingly common on bicycles in the more car dependent English-speaking countries, as bikes in these countries tended to be sports-oriented, with minimal clearance between tires and frame tubes for fenders, or were ridden only in mild conditions, although there are a few fenders that are designed to be attached to the seat post. The trend towards urban biking which has doubled in the past decade, lead to production, import and use boom in utility bikes. European utility bicycles, traditional roadsters used in developing countries, serious touring bicycles, and beach cruisers are nearly always fitted with fenders, universally known in British English as mudguards. They are also fitted to motorcycles.

In the UK it is a legal requirement that a motorcycle should be fitted with mudguards.[3] While motorcycles are invariably fitted with mudguards, only touring cycles generally have fully functional mudguards. Some machines can be seen with a stub of a mudguard only a few inches long, which satisfies the legal requirements but does not actually provide any protection from thrown mud and spray.

Sporty-styled or racing motorcycles sometimes come with, or have added as an aftermarket accessory, a "hugger" rear fender, attached to the rear swingarm and very close to the tire, rather than attached to the rear subframe and away from the tire.[4][5] Conversely, the practice of removing the front fender and reducing the size of the rear fender produced the bobber customization style of the 1950s onwards.