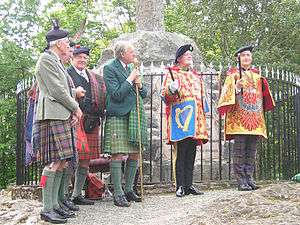 The Hon Adam Bruce at his installation as Finlaggan Pursuivant of Arms of Clan Donald. Finlaggan wears a tabard emblazoned with the arms of his employer, the Chief of Clan Donald. The four participating chiefs are to the left.

Finlaggan Pursuivant of Arms is the private officer of arms of the Clan Donald in Scotland.

The office of Finlaggan Pursuivant is held by Thomas Miers, who was appointed at a ceremony in Edinburgh on 25 July 2009. Mr Miers succeeds the Hon. Adam Robert Bruce (b. 1968) following his appointment as Unicorn Pursuivant. Bruce was appointed by Godfrey James Macdonald, 8th Baron Macdonald of Slate, Chief of the Name and Arms of Macdonald and High Chief of Clan Donald. This post was revived in 2005, after 510 years, in a ceremony attended by Ross Herald of Arms in Ordinary from the Court of the Lord Lyon and the four MacDonald chiefs.[1]

The heraldic title comes from Finlaggan, near Port Askaig in Islay, the centre of the realm of the Macdonald Lords of the Isles until they lost power in 1493.[1][2]

Bruce was inducted as Finlaggan Pursuivant on Saturday, 11 June 2005 at Glencoe in the Scottish Highlands. He was sworn in during the re-creation of an ancient ceremony in front of a hundred Macdonald clansfolk and their supporters by Lord Macdonald with the assistance of Ranald MacDonald of Clan Ranald, Ranald MacDonell of Glengarry and Sir Ian Godfrey Bosville Macdonald, 17th Baronet of Sleat. He took an oath of office to "bear fealty and true service to the high chief of Clan Donald, and the chiefs and high council of the clan". The four chiefs, each dressed in a kilt of his family's tartan, ceremonially anointed the new pursuivant by sprinkling wine on his head to mark his new position.[1][3]

The ceremony was conducted in front of a monument to the Massacre of Glencoe and was led by Portsoy resident Charles Burnett, Ross Herald of Arms at the Court of the Lord Lyon dressed in a tabard of the Royal Arms as used in Scotland. Bruce was given a baton of office and donned specially-woven £6,000 gold tabard emblazoned with the arms of Lord Macdonald – a red spread-eagle with a black galley on the breast. Bagpipers provided musical accompaniment.[1][4]

Mark Dennis, an advocate and heraldist in St Andrews, designed the ceremony for this occasion, a task made difficult since no records exist of exactly how a pursuivant may have been appointed. He also designed the Finlaggan tabard.[3]

Bruce's installation as Finlaggan marks the revival of the ancient practice of senior clan chiefs having their own private pursuivants to look after matters of clan heraldry and genealogy. Finlaggan joins that of Slains Pursuivant to the Earl of Erroll, Garioch Pursuivant to the Countess of Mar and Endure Pursuivant of the Earl of Crawford and Balcarres.[1] 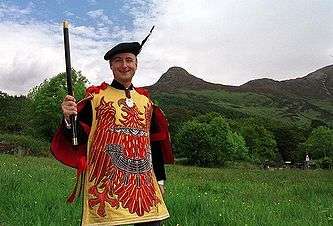