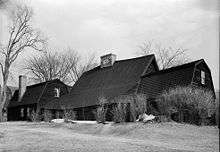 Fairbanks House, built in 1636, is the oldest surviving timber frame house in America

Gedney and Cox Houses circa 1665 and located at 21 High Street, near the intersection of Summer Street in the Chestnut Street District.

In colonial American architecture and design, the First Period was the time period of approximately 1626 through 1725. There are more houses constructed by America's earliest settlers in Essex County, Massachusetts than anywhere else in the country. Its successor is the Colonial Georgian Period.

Among other characteristics, First Period houses have a steeply pitched roof; a slightly asymmetrical plan; and a central chimney. The first period house is distinguished from later houses by its exposed (often decorated or chamfered) frame in the interior. Some early windows in modest houses may have had no glazing, but the standard first period window, until at least 1700, was the diamond-paned casement. No example of this type of window survives in situ; all current examples date to (at the very earliest) the late 19th century. Multiple-light, sliding sash windows started to appear around 1700, and by about 1750 had supplanted the earlier type.