Five-a-side football is a variation of association football in which each team fields five players (four outfield players and a goalkeeper). Other differences from football include a smaller pitch, smaller goals, and a reduced game duration. Matches are played indoors, or outdoors on AstroTurf or artificial grass pitches that may be enclosed within a barrier or "cage" to prevent the ball from leaving the playing area and keep the game flowing.

The penalty area is significantly different from football: it is semi-circular in shape, only the goalkeeper is allowed to touch the ball within it, and he or she may or may not be allowed out. Goalkeepers are only allowed to give the ball out to another player through hands. The goalkeeper may only kick the ball if it is in the course of making a save. There are no offside rules. Headers are not allowed. Yellow cards may result in the offending player being sent to the "sin bin" for a pre-determined length of time. Red cards work in the same way as the 11-a-side game. Charging/sliding tackles are awarded a yellow card.

Additionally, metal studded boots or blades cannot be worn, as it damages the playing surface. Players are also required to wear shin guards but this is usually at the discretion of the referee.

Five-a-side is commonly played informally, and the rules are therefore flexible and are sometimes decided immediately before play begins; this is in contrast to futsal, for which official laws are published by FIFA.

The English FA have drawn up a full list of laws for the small-sided game which expands upon the rules outlined above and includes minimum/maximum pitch dimensions as well as technicalities on free-kicks and other parts of the game.[1][2][3][4] 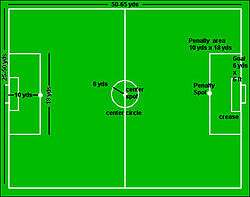 Seven-a-side pitch markings. Dimensions and shape of penalty area may differ for other variants.

A variation with increased pitch size and number of players on a team. In this variation there are five outfield players and one goalkeeper on the pitch for each team at any one time. Rules do not greatly differ from those found in five-a-side football.

This is another variation with increased pitch and team size; in this case with six outfield players and a goalkeeper on each side. The rules generally do not differ from those from five-a-side.[5]

There are many operators of five-a-side football in the UK, who run and organise small-sided football leagues at outdoor and indoor venues across the United Kingdom.[6]

The F5WC is the world's largest amateur five-a-side football tournament in the world with over 48 participating nations.

The popularity of five-a-side youth football has grown tremendously within the US. [7] [8] Many organisations have chosen this format and modified it slightly to promote an environment where children can excel early in youth sports. [9] American Youth Soccer Organization, United States Youth Soccer Association, and Fun Fair Positive Soccer are among the largest organisations bringing this format to the regional US-based youth soccer arena. [10] [11] [10] [12] [13] [14]

In recent years a few five-a-side teams have found themselves with sponsorship deals amounting up to thousand of pounds contracts. Sponsors feel with the vast numbers of participation in five-a-side football rising in the UK that it is a good place to advertise and tend to sponsor competition winners or league winners at local facilities so that they know that their deals are with the best five-a-side teams around the area.[15]