Project logo showing the use of the Zanzibar red colobus as the flagship species for a conservation organization in Zanzibar, Tanzania. 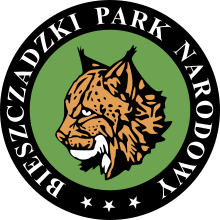 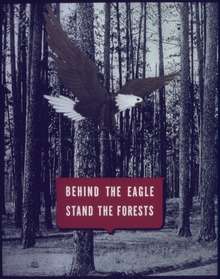 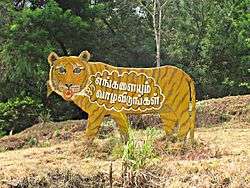 Display showing the use of the tiger as the flagship species for a campaign at Berijam lake in Kodaikanal, India

500 Tanzanian shillings bank note showing the use of the African buffalo as a flagship species for the country's wildlife.

5000 Tanzanian shillings bank note showing the use of the Black rhinoceros as a flagship species for the country's wildlife.

10000 Tanzanian shillings bank note showing the use of the African savanna elephant as a flagship species for the country's wildlife.

Several definitions have been advanced for the flagship species concept and for some time been there has been confusion even in the academic literature.[2] Most of the latest definitions focus on the strategic and socio-economical character of the concept, with a recent publication establishing a clear link with the marketing field.[2]

The term flagship is linked to the metaphor of representation. In its popular usage, flagships are viewed as ambassadors or icons for a conservation project or movement.[5]

However, more recently, work in the field of microbiology[6][7] has started to use the concept of flagship species in a distinct way. This work relates to the biogeography of micro-organisms and uses particular species because "eyecatching “flagships” with conspicuous size and/or morphology are the best distribution indicators".[6]

The flagship species concept appears to have become popular around the mid 1980s[11] within the debate on how to prioritise species for conservation. The first widely available references to use the flagship concept applied it to both neotropical primates[12] and African elephants and rhinos,[13] in the typical mammal centric approach that still dominates how the concept is used today[8][10][14]

The use of the concept has been largely dominated by large bodied species,[15] especially mammals,[14] although species from other taxonomic groups have occasionally been used[16]

Flagship species can be selected according to many different characteristics depending on what is valued by the audience they try to target.[2][10] This is best illustrated by the differences in recommendations made for flagship species selection targeting different target audiences such as local communities.[17] and tourists.[15]

Several limitations have been recognized concerning the use of flagship species:[1]

A major challenge for the deployment of several flagship species in non-Western contexts is that they may come into conflict with local communities, thereby jeopardizing well-intended conservation actions. This has been termed 'flagship mutiny' and is exemplified by the Asian elephant in countries where there is human-elephant conflict.[8]

Other types of conservation flagships

Conservation flagships can also appear at broader levels, for example as ecosystems (such as coral reefs or rainforests or protected areas (Serengeti or Yellowstone).[2] A number of recent initiatives has developed new conservation flagships based on conservation values of particular areas or species. Examples of these are the EDGE project run by the Zoological Society of London and the Hotspots run by Conservation International.[2]