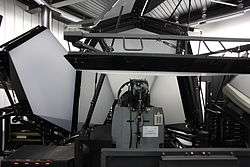 A military Flight simulator at Payerne air base, Switzerland

A flight simulator is a device that artificially re-creates aircraft flight and the environment in which it flies, for pilot training, design, or other purposes. It includes replicating the equations that govern how aircraft fly, how they react to applications of flight controls, the effects of other aircraft systems, and how the aircraft reacts to external factors such as air density, turbulence, wind shear, cloud, precipitation, etc. Flight simulation is used for a variety of reasons, including flight training (mainly of pilots), the design and development of the aircraft itself, and research into aircraft characteristics and control handling qualities.[1]

An area of training was for air gunnery handled by the pilot or a specialist air gunner. Firing at a moving target requires aiming ahead of the target (which involves the so-called lead angle) to allow for the time the bullets require to reach the vicinity of the target. This is sometimes also called "deflection shooting" and requires skill and practice. During World War I, some ground-based simulators were developed to teach this skill to new pilots.[2] 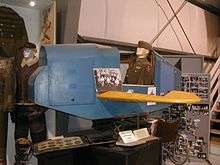 The best-known early flight simulation device was the Link Trainer, produced by Edwin Link in Binghamton, New York, USA, which he started building in 1927. He later patented his design, which was first available for sale in 1929. The Link Trainer was a basic metal frame flight simulator usually painted in its well-known blue color. Some of these early war era flight simulators still exist, but it is becoming increasingly difficult to find working examples.[3]

The Link family firm in Binghamton manufactured player pianos and organs, and Ed Link was therefore familiar with such components as leather bellows and reed switches. He was also a pilot, but dissatisfied with the amount of real flight training that was available, he decided to build a ground-based device to provide such training without the restrictions of weather and the availability of aircraft and flight instructors. His design had a pneumatic motion platform driven by inflatable bellows which provided pitch and roll cues. A vacuum motor similar to those used in player pianos rotated the platform, providing yaw cues. A generic replica cockpit with working instruments was mounted on the motion platform. When the cockpit was covered, pilots could practice flying by instruments in a safe environment. The motion platform gave the pilot cues as to real angular motion in pitch (nose up and down), roll (wing up or down) and yaw (nose left and right).[4]

Initially, aviation flight schools showed little interest in the "Link Trainer". Link also demonstrated his trainer to the U.S. Army Air Force (USAAF), but with no result. However, the situation changed in 1934 when the Army Air Force was given a government contract to fly the postal mail. This included having to fly in bad weather as well as good, for which the USAAF had not previously carried out much training. During the first weeks of the mail service, nearly a dozen Army pilots were killed. The Army Air Force hierarchy remembered Ed Link and his trainer. Link flew in to meet them at Newark Field in New Jersey, and they were impressed by his ability to arrive on a day with poor visibility, due to practice on his training device. The result was that the USAAF purchased six Link Trainers, and this can be said to mark the start of the world flight simulation industry.[4] 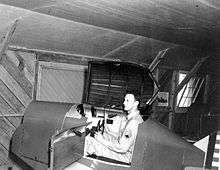 A different type of World War II trainer was used for navigating at night by the stars. The Celestial Navigation Trainer of 1941 was 13.7 m (45 ft) high and capable of accommodating the navigation team of a bomber crew. It enabled sextants to be used for taking "star shots" from a projected display of the night sky.[4]

In 1954 United Airlines bought four flight simulators at a cost of $3 million from Curtiss-Wright that were similar to the earlier models, with the addition of visuals, sound and movement. This was the first of today's modern flight simulators for commercial aircraft.[6] 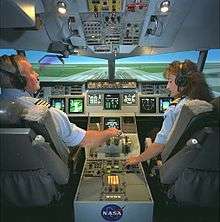 Cockpit of a twinjet flight simulator. 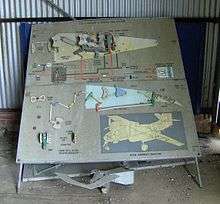 Several different devices are utilized in modern flight training. Cockpit Procedures Trainer (CPT) are used to practice basic cockpit procedures, such as processing emergency checklists, and for cockpit familiarization. Certain aircraft systems may or may not be simulated. The aerodynamic model is usually extremely generic if present at all.[7]

Statistically significant assessments of skill transfer based on training on a simulator and leading to handling an actual aircraft are difficult to make, particularly where motion cues are concerned. Large samples of pilot opinion are required and many subjective opinions tend to be aired, particularly by pilots not used to making objective assessments and responding to a structured test schedule. For many years, it was believed that 6 DOF motion-based simulation gave the pilot closer fidelity to flight control operations and aircraft responses to control inputs and external forces and gave a better training outcome for students than non-motion-based simulation. This is described as "handling fidelity", which can be assessed by test flight standards such as the numerical Cooper-Harper rating scale for handling qualities. Recent scientific studies have shown that the use of technology such as vibration or dynamic seats within flight simulators can be equally as effective in the delivery of training as large and expensive 6-DOF FFS devices.[8][9]

When a manufacturer wishes to have an ATD model approved, a document that contains the specifications for the model line and that proves compliance with the appropriate regulations is submitted to the FAA. Once this document, called a Qualification Approval Guide (QAG), has been approved, all future devices conforming to the QAG are automatically approved and individual evaluation is neither required nor available.[10]

Flight simulator "levels" and other categories

The following levels of qualification are currently being granted for both airplane and helicopter FSTD:

The largest flight simulator in the world is the Vertical Motion Simulator (VMS) at NASA Ames Research Center in "Silicon Valley" south of San Francisco. This has a very large-throw motion system with 60 feet (+/- 30 ft) of vertical movement (heave). The heave system supports a horizontal beam on which are mounted 40 ft rails, allowing lateral movement of a simulator cab of +/- 20 feet. A conventional 6-degree of freedom hexapod platform is mounted on the 40 ft beam, and an interchangeable cabin is mounted on the platform. This design permits quick switching of different aircraft cabins. Simulations have ranged from blimps, commercial and military aircraft to the Space Shuttle. In the case of the Space Shuttle, the large Vertical Motion Simulator was used to investigate a longitudinal pilot-induced oscillation (PIO) that occurred on an early Shuttle flight just before landing. After identification of the problem on the VMS, it was used to try different longitudinal control algorithms and recommend the best for use in the Shuttle program.[15]

AMST Systemtechnik GmbH (AMST) of Austria and Environmental Tectonics Corporation (ETC) of Philadelphia, US, manufacture a range of simulators for disorientation training, that have full freedom in yaw. The most complex of these devices is the Desdemona simulator at the TNO Research Institute in The Netherlands, manufactured by AMST. This large simulator has a gimballed cockpit mounted on a framework which adds vertical motion. The framework is mounted on rails attached to a rotating platform. The rails allow the simulator cab to be positioned at different radii from the centre of rotation and this gives a sustained G capability up to about 3.5.[16][17]