Football at the 1908 Summer Olympics

At the 1908 Summer Olympics in London, Great Britain, an official football tournament between national representative selections was contested for the first time: football at the two previous games had been played between club teams. Eight teams entered (including two from France), although Hungary and Bohemia withdrew before the start. Denmark's Sophus "Krølben" Nielsen set a record by scoring 10 goals in a 17-1 win against France. Great Britain won the gold. Among those representing the Danish team was the famous mathematician Harald Bohr.

The matches were held at White City Stadium in London. 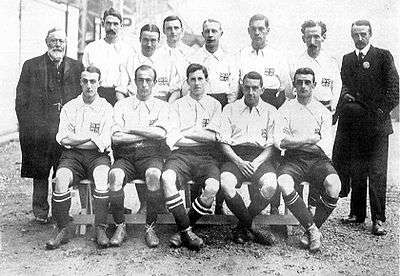 Great Britain won the Gold Medal after beating Denmark at the final. 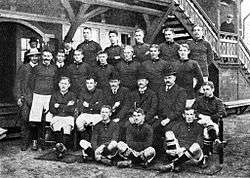 Hungary withdrew before the tournament started due to the Bosnian crisis.

Bohemia were forced to withdraw before the tournament started after losing their FIFA membership.

The French were so shocked by their humiliating 17-1 defeat against Denmark that they declined to play for the bronze medal; therefore, the Netherlands played Sweden for third place.[1]