This article is about the magazine. For other uses, see Foreign affairs (disambiguation).

Foreign Affairs is an American magazine of international relations and U.S. foreign policy published by the Council on Foreign Relations, a nonprofit, nonpartisan, membership organization and think tank specializing in U.S. foreign policy and international affairs.[1] Founded in 1922, the print magazine is currently published every two months, while the website publishes articles daily.

Foreign Affairs is considered one of America's most influential foreign policy magazines. Over its long history, the magazine has published a number of seminal articles including George Kennan's "X Article," published in 1947, and Samuel P. Huntington's "The Clash of Civilizations," published in 1993.[2][3] The magazine often publishes articles by important academics, public officials, and policy leaders, including Robert O. Keohane, Hillary Clinton, Donald H. Rumsfeld, Ashton Carter, Colin L. Powell, Francis Fukuyama, David Petraeus, Zbigniew Brzezinski, John J. Mearsheimer, and Joseph S. Nye Jr.[4] It is considered a forum for debate among academics and policy makers. According to the Journal Citation Reports, the journal has a 2014 impact factor of 2.009, ranking it 6th out of 85 journals in the category "International Relations".[5]

The Council on Foreign Relations, founded in the summer of 1921, primarily counted diplomats, financiers, scholars, and lawyers among its members. Its founding charter declared its purpose should be to "afford a continuous conference on international questions affecting the United States, by bringing together experts on statecraft, finance, industry, education, and science."[6][7] In its first year, the Council engaged primarily in discourse via meetings and small discussion groups, however, eventually it decided to seek a wider audience. The Council began publishing Foreign Affairs in September 1922 on a quarterly basis.[6][8]

The Council named Professor Archibald Cary Coolidge of Harvard University as the journal's first editor. As Coolidge was unwilling to move from Boston to New York, Hamilton Fish Armstrong a Princeton alumnus and a European correspondent of the New York Evening Post was appointed managing editor and worked New York, handling the day-to-day mechanics of publishing the journal. Armstrong chose the distinctive light blue color for the cover of the magazine, while his sisters, Margaret and Helen, designed the logo and lettering respectively.[9]

The lead article in the first issue of Foreign Affairs was written by former Secretary of State under Theodore Roosevelt's Administration, Elihu Root. The article argued wrote that the United States had become a World power and as such that the general population needed to be better informed about international matters. John Foster Dulles, then a financial expert attached to the American Commission to Negotiate Peace, who would later become Secretary of State under Dwight D. Eisenhower, also contributed an article to the inaugural issue of Foreign Affairs on Allied debt following World War I.[9]

In 1925, Foreign Affairs published a series of articles, entitled "Worlds of Color,"[11] by prominent African American intellectual W. E. B. Du Bois. DuBois, a personal friend of Armstrong, wrote mainly about race issues and imperialism. Although in the early days of publication the journal did not have many female authors, in the late 1930s American journalist for Time Magazine Dorothy Thompson would contribute articles.[9] 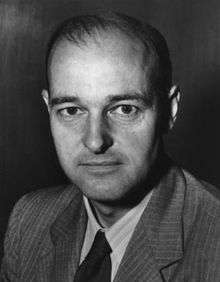 George F. Kennan published his doctrine of containment in the July 1947 issue of Foreign Affairs.

The journal rose to its greatest prominence after World War II when foreign relations became central to United States politics, and the United States became a powerful actor on the global scene. Several extremely important articles were published in Foreign Affairs, including the reworking of George F. Kennan's "Long Telegram", which first publicized the doctrine of containment that would form the basis of American Cold War policy.

Louis Halle, a member of the U.S. Policy Planning Staff, also wrote an influential article in Foreign Affairs in 1950. His article, "On a Certain Impatience with Latin America", created the anticommunist intellectual framework that justified U.S. policy towards Latin America in the Cold War era. Halle's article described that the encouragement of democracy in postwar Latin America had ended. He demonstrated disgust over Latin America's inability to assume autonomy and to become democratic. His rationalization towards Latin America was later used to justify U.S. efforts to overthrow the left-leaning Guatemalan government.[12]

Since the end of the Cold War, and especially after the September 11, 2001, attacks, the journal's readership has grown significantly.

It was in Foreign Affairs that Samuel P. Huntington published his influential "Clash of Civilizations" article.

In the November/December 2003 issue of Foreign Affairs, Kenneth Maxwell wrote a review of Peter Kornbluh's book The Pinochet File: A Declassified Dossier on Atrocity and Accountability, which gave rise to a controversy about Henry Kissinger's relationship to the regime of Chilean dictator Augusto Pinochet and to Operation Condor. Maxwell claims that key Council on Foreign Relations members, acting at Kissinger's behest, put pressure on Foreign Affairs editor, James Hoge, to give the last word in a subsequent exchange about the review to William D. Rogers, a close associate of Kissinger, rather than to Maxwell; this went against established Foreign Affairs policy.[13] 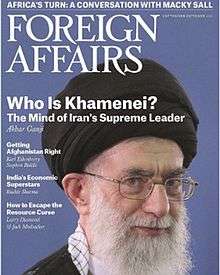 The article "Who is Khamenei" by Akbar Ganji, which was published in the magazine's September/October 2013 issue, emphasized the view that the Supreme Leader is the primary decision maker in Iran.

Then-opposition leader and former Ukrainian Prime Minister Yulia Tymoshenko caused a stir by publishing an article entitled "Containing Russia" in the May–June 2007 issue of Foreign Affairs accusing Russia under Vladimir Putin of expansionism and urging the rest of Europe to stand against him. Russian foreign minister Sergei Lavrov wrote an article in response, but he withdrew it, citing "censorship" from the Foreign Affairs editorial board. Tymoshenko's party went on to win the 2007 elections and she became Prime Minister once again.

Since its inception, Foreign Affairs has included a long book review section, typically reviewing 50 or more books per issue. The magazine's first editor, Archibald Cary Coolidge, asked his Harvard colleague, William L. Langer, a historian and World War I veteran, to run the section. Langer initially had full control over the magazine's book reviews and did all the reviews by himself. A month before the reviews were due, the Foreign Affairs office in New York would ship approximately one hundred books to Langer for review and within two weeks he would return his completed reviews for the next issue.