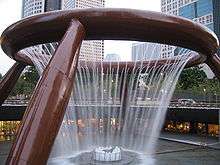 The Fountain of Wealth at Suntec City, Singapore

The Fountain of Wealth (Chinese: 财富之泉) is listed by the Guinness Book of Records in 1998 as the largest fountain in the world.[1] It is located in one of Singapore's largest shopping malls, Suntec City.

The Fountain of Wealth was constructed in 1995, together with the main Suntec City development. A symbol of wealth and life, the Fountain Of Wealth is recognized since 1998 by the Guinness Book Of World Records as the World's Largest Fountain. The bronze ring of the fountain is designed based on the Hindu Mandala, meaning universe and is a symbolic representation of the oneness in spirit and unity and further symbolizes the equality and harmony of all races and religions in Singapore. 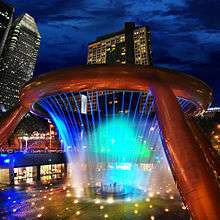 lit up at night

The fountain is made of silicon bronze, and consists of a circular ring with a circumference of 66 metres supported on four large slanted columns. It occupies an area of 1683.07 square metres,[3] with a height of 13.8m.[4] The sand cast silicon bronze, including all formwork and patternmaking was designed,manufactured and installed by DCG Design and Meridian Projects (from Melbourne Australia) in 1995. The base area of the fountain is 1,683 square metres. In the design plan of Suntec City, where the five tower blocks represent the fingers and thumb of a left hand emerging from the ground, the fountain forms the palm of the hand.

Apart from the jets of water cascading down from the ring, the centre of the fountain also boasts a large water screen, used for the nightly laser shows, as well as a large jet of water which is occasionally turned on, and spouts higher than the top of the ring.

Recent upgrades have also added small jumping and arcing fountains around the peripherals of the pool.