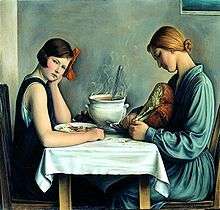 Barraud was the second eldest of four brothers who all painted or sculpted at various points in their lives.[2] The brothers, François, Aimé, Aurèle and Charles, were largely self-taught artists having been raised as professional plasterers and house painters.[1][2] Barraud attended evening classes at the local art school in 1911 together with his brothers.[1] In 1919, he exhibited his paintings in La Chaux-de-Fonds and participated in the National Exhibition of Fine Arts in Basel.[3] Encouraged by the success of the exhibitions he left Switzerland in 1922, and moved to Reims in France where he worked as a house painter for two years.[1][3] He married Marie, a French woman, in 1924.[3][4] Marie subsequently featured as a model in several of his paintings.[3][4] Around 1924 or 1925, Barraud found work in Paris as an artist and craftsman.[4] While living in Paris he studied painting at the École du Louvre.[1][4]

François Barraud painted mainly still lifes, female nudes and portraits, including several double portraits of himself and his wife, Marie[2][5] His precise, realist style of painting developed under the influence of the old Flemish and French masters he had studied at the Louvre.[2]

Barraud suffered periods of illness throughout his life and died of tuberculosis in Geneva, in 1934, at the age of 34.[2]

Arthur Stoll held a major collection of François Barraud's works. His works are also held in the Musée des beaux-arts in La Chaux-de-Fonds, the Coninx Museum in Zurich and the Foundation for Art, Culture and History in Winterthur.