The Frances Perkins Building is the Washington, D.C. headquarters of the United States Department of Labor. It is located at 200 Constitution Avenue NW and runs alongside Interstate 395. The structure is named after Frances Perkins, the U.S. Secretary of Labor from 1933–1945 and the first female cabinet secretary in U.S. history.[1]

During the time in office of President John F. Kennedy, planning was undertaken to consolidate most of the Department of Labor's offices, then scattered around more than twenty locations. As part of the effort to improve and redevelop the Pennsylvania Avenue corridor, it was decided to create an entirely new building for the Labor Department in that area. The building was designed by the joint venture of Brooks, Barr, Graeber and White of Austin, Texas, and Pitts, Mebane, Phelps and White of Houston, Texas. The principal construction contractor was the J.W. Bateson Company of Dallas, Texas.

Construction on the New Labor Building (NDOL) began in the middle 1960s. When finished in 1975 the new building contained over one million square feet of usable space and cost $95 million. It was one of the first federal buildings to obtain air rights so that it could be constructed over a freeway, I-395. The ceremonial cornerstone for the NDOL was laid on October 18, 1974, with President Gerald R. Ford and Secretary Peter J. Brennan presiding. In February 1975 the first wave of employees moved in.[2]

After a number of years, the name “New Labor Building” no longer seemed appropriate. Finally, an employee suggested that the building should be renamed for the former Secretary of Labor, Frances Perkins, and the idea was warmly accepted. Senator Carl Levin of Michigan also played a significant role in the notion.[3] The ceremony to rename the NDOL and dedicate it as the Frances Perkins Building was held on April 10, 1980 – the 100th anniversary of her birth.[3] President Jimmy Carter and Secretary of Labor Ray Marshall presided over the ceremony; Senator Levin was present as well, as was Susanna Coggeshall, the daughter of Perkins.[4] A plaque on the building said that Perkins' "legacy of social action enhances the lives of all of us."[5] On the same day, the United States Postal Service issued a new 15-cent stamp bearing the likeness of Perkins.[5]

Interior of the building in 2009, as new Secretary Hilda Solis arrives

The six-story structure is made of steel and limestone.[5] The building features the Cesar Chavez Auditorium, Wirtz Library, and the Labor Hall of Honor. 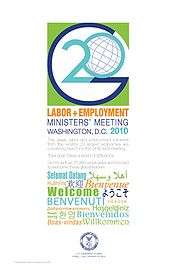 In April 2010, there was a meeting of the Labor and Employment Ministers of the G-20 hosted by Secretary of Labor Hilda Solis.