He was born in Bologna in 1578,[1] the son of a silk merchant who intended him to go into his own trade. By the age of twelve, however, Albani had become an apprentice to the competent mannerist painter Denis Calvaert, in whose studio of he met Guido Reni. He soon followed Reni to the so-called "Academy" run by Annibale, Agostino, and Ludovico Carracci. This studio fostered the careers of many painters of the Bolognese school, including Domenichino, Massari, Viola, Lanfranco, Giovanni Francesco Grimaldi, Pietro Faccini, Remigio Cantagallina, and Reni. 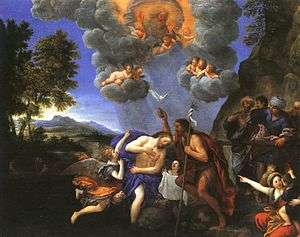 In 1600, Albani moved to Rome to work on the fresco decoration of the gallery of the Palazzo Farnese, which was being completed by the studio of Annibale Carracci. At this time, Rome, under Clement VIII Aldobrandini (1592–1605) was exhibiting some degree of administrative stability and renewed artistic patronage. While Pope Clement had been born into a Florentine family resident in Urbino, his family was allied by marriage to the Emilia-Romagna and the Farnese, since Ranuccio I Farnese, Duke of Parma had married Margherita Aldobrandini. Parma, like Bologna, being part of the Region of Emilia-Romagna, it was not surprising that Cardinal Odoardo Farnese, Ranuccio's brother, chose to patronise the Carraccis from Bologna, thereby establishing Bolognese dominance of Roman fresco painting for nearly two decades.

In 1609, he completed the ceiling of a large hall with Fall of Phaeton and Council of the Gods for the Palazzo Giustiniani (now Palazzo Odescalchi) at Bassano (di Sutri) Romano. This work was commissioned by the Marchese Vicenzo Giustiniani, also famous as a patron of Caravaggio.

During 1612-14, Albani completed the Choir frescoes at the church of Santa Maria della Pace which had just been remodelled by Pietro da Cortona. In 1616 he painted ceiling frescoes of Apollo and the Seasons at Palazzo Verospi in Via del Corso for the cardinal Fabrizio Verospi.

In his later years, Albani developed a mutual, though respectful, rivalry with the more successful Guido Reni, who was also heavily patronized by the Aldobrandini, and under whom Albani had worked under at the chapel of the Palazzo del Quirinale.

Albani's best frescoes are those on mythological subjects. Among the best of his sacred subjects are a St Sebastian and an Assumption of the Virgin, both in the church of San Sebastiano fuori le Mura in Rome. He was among the Italian painters to devote himself to painting cabinet pictures. His mythological subjects include The Sleeping Venus, Diana in the Bath, Danaë Reclining, Galatea on the Sea, and Europa on the Bull. A rare etching, the Death of Dido, is attributed to him. Carlo Cignani, Andrea Sacchi, Francesco Mola, and Giovanni Francesco Grimaldi were among his students. Following the death of his wife he returned to Bologna, where he married a second time and lived until his death.

Albani never acquired the monumentality or tenebrism that was quaking the contemporary world of painters, and is often derided often for his lyric, cherubim-filled sweetness, which often has not yet shaken the mannerist elegance. While Albani's thematic would have appealed to Poussin, he lacked the Frenchman's muscular drama. His style sometimes seems to have more in common with the decorative Rococothan with the painting of his own time.