This article is about the Franciscan movement in general. For the original and largest Catholic Franciscan order, see Order of Friars Minor. 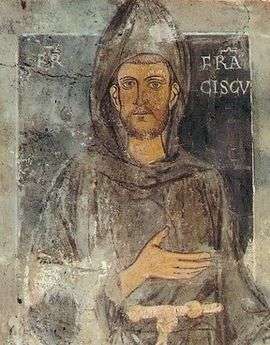 Saint Francis of Assisi, founder of the Order of Friars Minor.

Franciscans refers to people and groups (religious orders) who adhere or claim to adhere to the teachings and spiritual disciplines of Saint Francis of Assisi. The original movement, the Order of Friars Minor, was established by Saint Francis, and has produced several related orders and movements within the Catholic Church. Orders adhering to Franciscan spirituality also exists within other Christian denominations, including Old Catholicism, Anglicanism, and Lutheranism.

There are three main orders of Catholic Franciscans, with their subdivisions. There are also several affiliated organizations.

The First Order or the "Order of Friars Minor" are commonly called simply the "Franciscans". This Order is a mendicant religious order of men, some of whom trace their origin to Francis of Assisi.[1] Their official Latin name is the Ordo Fratrum Minorum.[2] St. Francis thus referred to his followers as "Fraticelli", meaning "Little Brothers". Franciscan brothers are informally called friars or the Minorites.[3]

The modern organization of the Friars Minor comprises three separate families or groups, each considered a religious order in its own right under its own minister general and with particular type of governance. They all live according to a body of regulations known as the Rule of St. Francis.[1] These are

The Second Order, the Order of St. Clare, most commonly called the Poor Clares in English-speaking countries, abbr. O.S.C., consists of religious sisters. Prior to 1263, this order was referred to as the Poor Ladies, the Poor Enclosed Nuns, and the Order of San Damiano.[4]

The Franciscan third order, known as the Third Order of Saint Francis, has many men and women members, separated into two main branches:

The 2013 Annuario Pontificio gave the following figures for the membership of the principal male Franciscan orders:.[5]

1,500 houses, comprised in about 100 provinces and Custodiae, with about 16,000 members. In 1897 distinctions between the Observants, Discalced, Recollects and Riformati were dissolved by Pope Leo XIII and they were joined under general constitutions. The Capuchins and Conventuals wanted the reunited Observants to be referred to as The Order of Friars Minor of the Leonine Union. Instead they were called simply the Order of Friars Minor. Despite the tensions caused by this forced union the Order grew from 1897 to reach a peak of 26,000 members in the 1960s before declining from the 1970s onwards. The Order is headed by a Minister General, who since 2003 had been Father José Rodríguez Carballo. However, on Saturday, 6 April 2013, Pope Francis, in his first appointment to a senior post in the Roman Curia, appointed Father Carballo as Titular Archbishop of Belcastro and Secretary, or deputy director, of the Congregation for Institutes of Consecrated Life and Societies of Apostolic Life (the Congregation for Religious), the department that oversees all Catholic male and female religious orders and related groups (the Roman Curia is the term for the various departments of the Holy See that, along with the Pope and Bishops, governs the global Catholic Church). With this appointment, a new Minister General will need to be selected by the Franciscans and then approved by Pope Francis. Br. Michael Anthony Perry, was elected as Minister General on May 2013, succeeded Br. José Rodriguez Carballo.[6]

The Order of Friars Minor Capuchin are the youngest branch of Franciscans, going back to 1525, when some Friars Minor in the Marches wanted to live a stricter life of prayer and poverty to be closer to the original intentions of St. Francis. Thanks to the support of the Papal Court the new branch received early recognition and grew fast, first in Italy, and since 1574 all over Europe. The name Capuchins refers to the peculiar shape of the long hood; originally a popular nickname, it has become a part of the official name of the Order, which now exists in 106 countries all over the world, with around 10,500 brothers living in more than 1700 communities (fraternities, friaries).

The Conventual Franciscans consists of 290 houses worldwide with almost 5000 friars in the world. They have experienced growth in this century throughout the world. They are located in Italy, the United States, Canada, Australia, and throughout South/Central America, and Africa. They are the largest of number in Poland because of the work and inspiration of St. Maximilian Kolbe.

The Secular Franciscan Order, known as the Third Order Secular of St. Francis prior to 1978, is an order founded by St. Francis in 1212 for brothers and sisters who do not live in a religious community. Members of the order continue to live secular lives, however they do gather regularly for fraternal activities. In the United States alone there are 17,000 professed members of the order.

The Third Order Regular of the Brothers of the Poor of St. Francis of Assisi, CFP are an active community based in the United States with houses in Belgium, The Netherlands, Germany and Brazil. These Franciscans are challenged to live an integrated life through prayer, community, and their ministry to serve the poor, neglected and disadvantaged youth, the powerless, people in need, and the elderly.

The Brothers of the Poor live by their vows of poverty (living a simple lifestyle, using talents and gifts to make a better world), consecrated chastity (loving all, possessing no one, striving sincerely, for singleness of heart, a celibate way of loving and being loved), and obedience (to God, to the community, to the Church and to self).

The Brothers of the Poor also serve persons with AIDS and people who ask for help regardless of their religion or their social/economic background. They are teachers, childcare workers, social workers, counselors, pastoral ministers, retreat ministers, religious educators, school administrators, and much more.

The Regular Tertiaries, officially the Third Order Regular of St. Francis of Penance, who operate the Franciscan University of Steubenville, follow a rule approved by Pope Leo X. They form less than a score of houses—two in Rome, five in Sicily, seven in Austria, and two in the United States.

These numbers stand in contrast to the strength of the Third Order Regular at the end of the Middle Ages, when it had over 8,000 houses, or in the middle of the seventeenth century when there were about 70,000 members, divided into 150 provinces. The noteworthy proportional decline of the Third Order Regular in comparison to the First Order shows that the latter presents more attraction in the modern day, as it remains truest to its original principles.

Brothers and Sisters of Penance of St. Francis

The Brothers and Sisters of Penance of St. Francis, is a private confraternity of the Roman Catholic Church whose members strive to model their lives according to the Rule and Statutes of the Primitive Rule of the Third Order of St. Francis, which was written for lay people in 1221 by St. Francis of Assisi.

Right now there are more than several hundred members within the United States, and a few hundred more throughout the world. The order was originally started in 1996 by members of the Archdiocese of St. Paul in Minnesota.

Society of the Atonement

The Society of the Atonement, also known as Graymoor Friars and Graymoor Sisters, started in 1898 as a religious community in the Episcopal Church, and came into union with the Holy See in 1909.

Franciscan Friars of the Immaculate

Franciscan Friars of the Renewal

Franciscan Missionaries of the Eternal Word

The Franciscan Missionaries of the Eternal Word started in 1987, and are now a Public Clerical Association of the Faithful.

One of the results of the Oxford Movement in the Anglican Church during the 19th century was the re-establishment of religious orders, including some of Franciscan inspiration. The principal Anglican communities in the Franciscan tradition are the Community of St. Francis (women, founded 1905), the Poor Clares of Reparation (P.C.R.), the Society of Saint Francis (men, founded 1934), and the Community of St. Clare (women, enclosed). There is also a Third Order known as the Third Order Society of St Francis (T.S.S.F.).

A U.S.-founded order within the Anglican world communion is the Seattle-founded Order of Saint Francis[8] (OSF) an open, inclusive, and contemporary expression of an Anglican First Order of Friars. There is also an order of Clares in Seattle (Diocese of Olympia) The Little Sisters of St. Clare,[9] where the OSF is officially headquartered.

There are also some small Franciscan communities within European Protestantism and the Old Catholic Church.[10] There are some Franciscan orders in Lutheran Churches, including the Order of Lutheran Franciscans, the Evangelical Sisterhood of Mary, and the Evangelische Kanaan Franziskus-Bruderschaft (Kanaan Franciscan Brothers). In addition, there are associations of Franciscan inspiration not connected with a mainstream Christian tradition and describing themselves as ecumenical or dispersed.