For other ships with the same name, see French ship Tonnerre.

Tonnerre’s maiden voyage occurred between 10 April and 24 July 2007. During this voyage, Tonnerre was involved in Opération Licorne, the French co-deploying complement to the United Nations Operation in Côte d'Ivoire following the Ivorian Civil War. Gazelle and Cougar helicopters of the French Air Force operated from the ship during 9 July.

At the start of 2008, Tonnerre was involved in the Corymbe 92 mission (see Standing French Navy Deployments), a humanitarian mission in the Gulf of Guinea. During this deployment, Tonnerre acted on tip-offs from the European Maritime Analysis Operation Centre – Narcotics, and intercepted 5.7 tonnes of smuggled cocaine: 2.5 tonnes from a fishing vessel 520 kilometres (280 nmi) from Monrovia on 29 January,[2] and 3.2 tonnes from a cargo ship 300 kilometres (160 nmi) off Conakry. 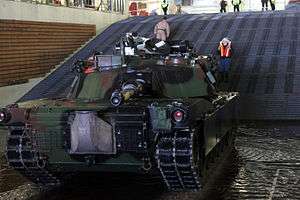 US M1 Abrams enters Tonnerre off the coast of North Carolina.

In May 2011, the French Military deployed Eurocopter Tiger and Aérospatiale Gazelle helicopters on the ship to augment forces engaged in Opération Harmattan and later Operation Unified Protector during the Libyan Civil War.[3] along with allied ships such as the British helicopter carrier HMS Ocean which also provided its own attack helicopters.[4]