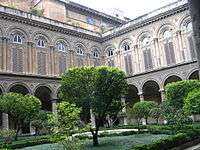 The courtyard. The first floor shutterd windows are those of a four sided gallery, housing the collection's principal paintings. 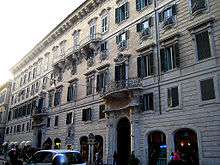 This wing, facing the via del Plebiscito, now forms shops and apartments.

The large collection of paintings, furniture and statuary has been assembled since the 16th century by the Doria, Pamphilj, Landi and Aldobrandini families now united through marriage and descent under the simplified surname Doria Pamphilj. The collection includes paintings and furnishings from Innocent X's Palazzo Pamphilj (in Piazza Navona), who bequeathed them to his nephew Camillo Pamphilj.

The Palazzo has grown over the centuries; it is likely the largest in Rome still in private ownership. The main collection is displayed in state rooms, including the chapel, complete with the mummified corpse of the family saint. However, the bulk is displayed in a series of four gilded and painted galleries surrounding a courtyard. An extensive suite of further rooms have now been converted to permanent well-lit galleries, containing the more medieval and Byzantine art in the collection.

The palace was renovated for the marriage of Andrea IV Doria Pamphilj Landi to Princess Leopoldina Maria of Savoy, daughter of Louis Victor, Prince of Carignan and Christine of Hesse-Rotenburg in 1767. Work was carried out under the supervision of Francesco Nicoletti, an architect from Trapani.

Velazquez's portrait of Innocent X, who rose to papacy as cardinal Giovan Battista Pamphilj in 1644, is considered the collection's masterpiece. Velazquez while not idealizing the pope's countenance, is not unflattering in the portrait; Innocent X's features were by his contemporaries believed to symbolise a despotic lifestyle and vindictive character. The portrait painted to commemorate the Holy Year was commissioned by his hedonistic sister-in-law Olimpia Maidalchini who was his close confidante and adviser, and some say mistress. Since 1927, Velázquez's portrait was placed in a specially designated small room along with a sculptured bust of the same pope by Bernini.

Olimpia Maidalchini's son Camillo Pamphilj, defying his powerful mother, renounced the Cardinalship conferred on him by his uncle the Pope and married the widowed Olimpia Borghese. Born an Aldobrandini it was she who brought the palazzo, then known as the Palazzo Aldobrandini, into the Pamphilj family. Following a period of exile in the country, to avoid confrontation with the Pope and Olimpia Maidalchini, the newly married couple took up permanent residence in the Palazzo Aldobrandini which from 1654 Camillo began to expand on a large scale; neighbouring houses and a convent were bought and demolished as the Palazzo grew, in spite of local opposition from the neighbouring Jesuits at the Collegio Romano. The architect in charge of this lengthy project was Antonio Del Grande. The façade facing the Via del Corso, however, is by Gabriele Valvassori. Following Camillo's death in 1666, building continued under the auspices of his two sons Giovanni Battista (his heir) and Benedetto.

One of Camillo and Olimpia's daughters, Anna Pamphilj, married the Genoese aristocrat Giovanni Andrea III Doria Landi in 1671, and it was their descendants who inherited the Palazzo when the Roman branch of the Pamphilj family ended in 1760. In 1763 Principe Andrea IV combined his Genoese and Roman names to the present Doria-Pamphilj-Landi. In 1767 the ceilings of the state rooms were frescoed by late-baroque artists such as Crescenzio Onofri, Aureliano Milani, and Stefano Pozzi (Sala degli Specchi).

The collection was first opened to the public by the three-quarters English Princess Orietta Pogson Doria Pamphilj, whose English husband Commander Frank Pogson added her name to his. Her own father, Prince Filippo Andrea VI, was half English. Princess Orietta and Commander Frank did much to restore the collection and the Palazzo; following her death in 2000 the guardianship of the collection was taken over by her adopted, English-born children, Jonathan Doria Pamphilj and Gesine Pogson Doria Pamphilj, who still live in the palazzo. Along with the possessions of the Colonna and Pallavacini-Rospigliosi families, this is one of the largest private art collections in Rome;

In the main painting galleries are:

Note: The Palazzo housing the Gallery Doria Pamphilj should not be confused with the Palazzo Pamphilj, in Rome's Piazza Navona. Nor should this palace be confused with a second Palazzo Doria-Pamphilj, a summer urban villa, in Valmontone near Rome; this palace, while badly damaged during the second war, is renowned for its late Baroque fresco series by Francesco Cozza, Pier Francesco Mola, and Mattia Preti[1]