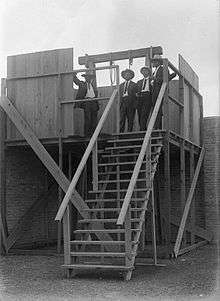 Unidentified men wait at the gallows prior to the hanging of Melquiades Chapa and Jose Buenrostro on May 19, 1916 in Brownsville, Texas

A gallows (or scaffold) is a frame, typically wooden, used for execution by hanging, or as a means of torture before execution, as was used when being hanged, drawn and quartered.

Occasionally, improvised gallows were used, usually by hanging the condemned from a tree or street light. Hangings from such improvised gallows are usually lynchings rather than judicial executions. In Afghanistan, Taliban used football goals as gallows. 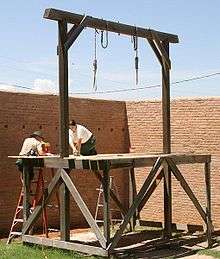 Gallows may be permanent to act as a deterrent and grim symbol of the power of high justice (the French word for gallows, potence, stems from the Latin word potentia, meaning "power"). Many old prints of European cities show such a permanent gallows erected on a prominent hill outside the walls, or more commonly near the castle or other seat of justice. In the modern era the gallows were often installed inside a prison; freestanding on a scaffold in the yard, erected at ground level over a pit, enclosed in a small shed of stone, brick or wood, built into the gallery of a prison wing (with the beam resting in brackets on opposite walls), or in a purpose-built execution suite of rooms within the wing.

Gallows can also be temporary. In some of the cases, they were even moved to the location of the crime. In England, pirates were typically executed using a temporary gallows, at low tide in the intertidal zone, then left for the sea to wash over them during the following high tides.[1] 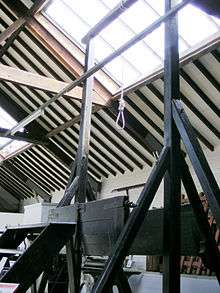 The Gallows in Rutland County Museum

The only surviving New Drop gallows in the UK are in Rutland County Museum. The gallows were portable and were set up at the gaol (jail) when needed. These gallows were first used in 1813 to hang two burglars. The New Drop design was not very effective as the drop was too short to break the neck cleanly.

If a crime took place inside, gallows were sometimes erected—and the criminal hanged—at the front door. In some cases of multiple offenders it was not uncommon to erect multiple temporary gallows, with one noose per condemned criminal. In one case a condemned strangled to death in agony for forty minutes until he finally died from asphyxiation.

Hanging people from early gallows sometimes involved fitting the noose around the person's neck while he or she was on a ladder or in a horse-drawn cart underneath. Removing the ladder or driving the cart away left the person dangling by the neck to slowly strangle. A noted example of this type of execution in the USA was the hanging of British spy John Andre in 1780.

Later, a "scaffold" with a trap-door tended to be used, so victims dropped down and died quickly from a broken neck rather than through strangulation, especially if extra weights were fixed to their ankles.

During the era of public execution in London, England, a prominent gallows stood at Tyburn, on what is now Marble Arch. Later executions occurred outside Newgate Gaol, where the Old Bailey now stands.