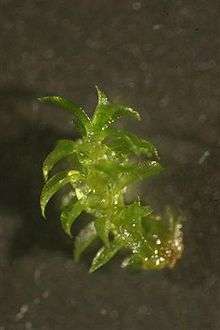 The word gametophore, also known as gametangiophore, is composed of gametangium and "phore" (Greek Φορά, "to be carried").[1] In moss and fern (Archegoniata) the gametophore is the bearer of the sex organs (gametangia), the female archegonia and the male antheridia.[2] If both the archegonia and antheridia are arranged at the same plant, they are called monoecious. If there are female and male plants they are called dioecious.

In Bryopsida the leafy moss plant (q. v. "Thallus") is called gametophore. It is the adult form of the haploid gametophyte and develops from the juvenile form, the protonema, under the influence of phytohormones (mainly cytokinins).[2] Whereas the filamentous protonema grows by apical cell division, the gametophore grows by division of three faced apical cells.