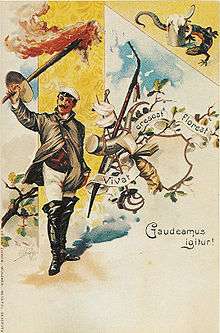 Postcard with symbols of traditional German student life from 1898 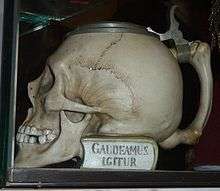 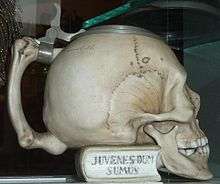 "Iuvenes dum sumus" (While we are young)

"De Brevitate Vitae" (Latin: "On the Shortness of Life"), more commonly known as "Gaudeamus Igitur" ("So Let Us Rejoice") or just "Gaudeamus", is a popular academic commercium song in many Western countries, mainly sung or performed at university graduation ceremonies. Despite its use as a formal graduation hymn, it is a jocular, light-hearted composition that pokes fun at university life. The song is thought to originate in a Latin manuscript from 1287. It is in the tradition of carpe diem ("seize the day") with its exhortations to enjoy life. It was known as a beer-drinking song in many early universities and is the official song of many schools, colleges, universities, institutions, student societies and is the official anthem of the International University Sports Federation.

The lyrics reflect an endorsement of the bacchanalian mayhem of student life while simultaneously retaining the grim knowledge that one day we will all die. The song contains humorous and ironic references to sex[1] and death, and many versions have appeared following efforts to bowdlerise this song for performance in public ceremonies. In private, students will typically sing ribald words.

The song is sometimes known by its opening words, "Gaudeamus igitur" or simply "Gaudeamus". In the UK, it is sometimes affectionately known as "The Gaudie". The centuries of use have given rise to numerous slightly different versions.

The proposition that the lyrics originate in 1287 is based on a manuscript held in the Bibliothèque nationale de France in Paris. A poem starting with the words Subscribere proposui ("Sign the proposed") has two verses that closely resemble the later Gaudeamus igitur verses, although neither the first verse nor the actual words Gaudeamus igitur appear. The music accompanying this poem bears no relation to the melody which is now associated with it. A German translation of these verses was made in about 1717 and published in 1730 without music. A Latin version in a handwritten student songbook, dating from some time between 1723 and 1750, is preserved in the Berlin State Library (formerly located at Marburg); however, this differs considerably from the modern text. The current Latin lyrics with a German translation were published by Halle in 1781 in Studentenlieder ("Students' Songs")[2] written by Christian Wilhelm Kindleben (1748-1785),[3] who admitted to making important changes to the text.[4]

Below is Kindleben's 1781 Latin version, with two translations to English (one anonymous and literal, and another by J. Mark Sugars, 1997).[5] The pseudo-Latin word antiburschius refers to opponents of the 19th-century politically active German student fraternities. The letter 'j' used in some modern transcriptions does not occur in classical Latin.

When sung, the first two lines and the last line of each stanza are repeated; for instance:

The first appearance in print of the present melody was in Lieder für Freunde der Geselligen Freude ("Songs for Friends of Convivial Joy"), published in Leipzig in 1782, together with Kindleben's German lyrics; however, the tune was evidently well known before this date. The first publication of the present Latin text together with the present melody was probably in Ignaz Walter's 1797 operatic setting of Doktor Faust.[6] It is also heard in Berlioz' Damnation of Faust.

Johannes Brahms quoted the hymn in the final section of his Academic Festival Overture, in a fortissimo rendition performed by the full orchestra.

Sigmund Romberg used it in the operetta The Student Prince, which is set at the University of Heidelberg.[7]

It is quoted in Johann Strauss II's, "Studenten-Polka" (Française, Op.263, first performed at the Redoutensaal (Students Ball) on 24 February 1862.

The hymn is quoted, along with other student songs, in the overture of Franz von Suppé's 1863 operetta Flotte Burschen, the action being once again set at the University of Heidelberg.[8]