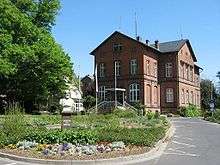 The Geisenheim Grape Breeding Institute was founded in 1872 and is located in the town of Geisenheim, in Germany's Rheingau region. In 1876 Swiss-born professor Hermann Müller joined the institute, where he developed his namesake grape variety Müller-Thurgau, which became Germany's most-planted grape variety in the 1970s. Professor Helmut Becker worked at the institute from 1964 until his death in 1989.[1]

Geisenheim is the only German institution to award higher academic degrees in winemaking. Formally, undergraduate level viticulture and enology, ending with a bachelor's degree in engineering is awarded by the University of Applied Sciences in Wiesbaden, and the newly introduced master's degree is awarded by the Giessen University.