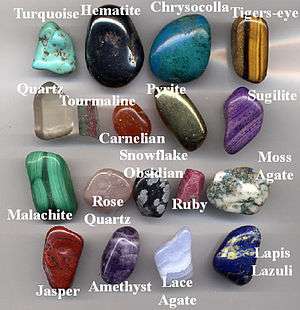 A selection of gemstone pebbles made by tumbling rough rock with abrasive grit in a rotating drum. The biggest pebble here is 40 millimetres (1.6 in) long.

Gemology or gemmology is the science dealing with natural and artificial gemstone materials. It is considered a geoscience and a branch of mineralogy. Some jewelers are academically trained gemologists and are qualified to identify and evaluate gems.[1]

Rudimentary education in gemology for jewelers and gemologists began in the nineteenth century, but the first qualifications were instigated after the National Association of Goldsmiths of Great Britain (NAG) set up a Gemmological Committee for this purpose in 1908. This committee matured into the Gemmological Association of Great Britain (also known as Gem-A), now an educational charity and accredited awarding body with its courses taught worldwide. The first US graduate of Gem-A's Diploma Course, in 1929, was Robert Shipley, who later established both the Gemological Institute of America and the American Gem Society. There are now several professional schools and associations of gemologists and certification programs around the world.

The first gemological laboratory serving the jewelry trade was established in London in 1925, prompted by the influx of the newly developed "cultured pearl" and advances in the synthesis of rubies and sapphires. There are now numerous gem labs around the world requiring ever more advanced equipment and experience to identify the new challenges - such as treatments to gems, new synthetics, and other new materials. 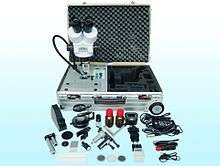 It is often difficult to obtain an expert judgement from a neutral laboratory. Analysis and estimation in the gemstone trade usually have to take place on site. Professional gemologists and gemstone buyers use mobile laboratories, which pool all necessary instruments in a travel case. Such so-called travel labs even have their own current supply, which makes them independent from infrastructure. They are also suitable for gemological expeditions.

Gemstones are basically categorized based on their crystal structure, specific gravity, refractive index, and other optical properties, such as pleochroism. The physical property of "hardness" is defined by the non-linear Mohs scale of mineral hardness.

Gemologists study these factors while valuing or appraising cut and polished gemstones. Gemological microscopic study of the internal structure is used to determine whether a gem is synthetic or natural by revealing natural fluid inclusions or partially melted exogenous crystals that are evidence of heat treatment to enhance color.

The spectroscopic analysis of cut gemstones also allows a gemologist to understand the atomic structure and identify its origin, which is a major factor in valuing a gemstone. For example, a ruby from Burma will have definite internal and optical activity variance from a Thai ruby.

When the gemstones are in a rough state, the gemologist studies the external structure; the host rock and mineral association; and natural and polished color. Initially, the stone is identified by its color, refractive index, optical character, specific gravity, and examination of internal characteristics under magnification.

Gem identification is basically a process of elimination. Gemstones of similar color undergo non-destructive optical testing until there is only one possible identity. Any single test is indicative, only. For example, the specific gravity of ruby is 4.00, glass is 3.15–4.20, and cubic zirconia is 5.6–5.9. So one can easily tell the difference between cubic zirconia and the other two; however, there is overlap between ruby and glass.

And, as with all naturally occurring materials, no two gems are identical. The geological environment they are created in influences the overall process so that although the basics can be identified, the presence of chemical "impurities" and substitutions along with structural imperfections create "individuals".

One test to determine the gem's identity is to measure the refraction of light in the gem. Every material has a critical angle, above which point light is reflected back internally. This can be measured and thus used to determine the gem's identity. Typically this is measured using a refractometer, although it is possible to measure it using a microscope.

Specific gravity, also known as relative density, varies depending upon the chemical composition and crystal structure type. Heavy liquids with a known specific gravity are used to test loose gemstones.

This method uses a similar principle to how a prism works to separate white light into its component colors. A gemological spectroscope is employed to analyze the selective absorption of light in the gem material. Essentially, when light passes from one medium to another, it bends. Blue light bends more than red light. How much the light bends will vary depending on the gem material. Coloring agents or chromophores show bands in the spectroscope and indicate which element is responsible for the gem's color.