Geoffrey Nunberg (born June 1, 1945) is an American linguist, researcher and an adjunct professor at the UC Berkeley School of Information. Nunberg has taught at Stanford University and served as a principal scientist at the Xerox Palo Alto Research Center from the mid-1980s to 2000. 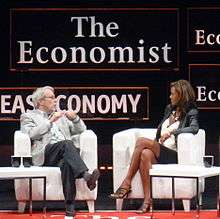 Geoffrey Nunberg talking with Juliette Powell at a conference in 2012

As a linguist, he is best known for his work on lexical semantics, in particular on the phenomena of polysemy, deferred reference and indexicality. He has also written extensively about the cultural and social implications of new technologies. Nunberg's criticisms of the metadata of Google Books ignited widespread a controversy among librarians and scholars.[1] [2]

Nunberg is a frequent contributor to the collective blog Language Log.

Nunberg has been commenting on language, usage, and society for National Public Radio's Fresh Air program since 1988. His commentaries on language also appear frequently in The New York Times and other publications. He is the emeritus chair of the American Heritage Dictionary usage panel. His books for general audiences include The Way We Talk Now: Commentaries on Language and Culture from NPR's Fresh Air, Going Nucular: Language, Politics, and Culture in Controversial Times,[3] Talking Right: How Conservatives Turned Liberalism into a Tax-Raising, Latte-Drinking, Sushi-Eating, Volvo-Driving, New York Times-Reading, Body-Piercing, Hollywood-Loving, Left-Wing Freak Show, and The Years of Talking Dangerously (2009).

His latest book Ascent of the A-Word: Assholism, the First Sixty Years was published in August 2012. The critic Malcolm Jones described Nunberg's method in that book as follows: "His means of studying the problem is utterly fresh: take a word, and the attitudes behind it and see where they came from and what they might say about us.[4]