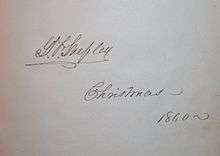 Autograph of General George Foster Shepley from an autograph album he gave to his daughter Anne at Christmas, 1860 (Private Collection of H. Blair Howell)

George Foster Shepley (January 1, 1819 – July 20, 1878) was a general in the Union Army during the American Civil War. He was appointed military and 18th Governor of Louisiana by General Benjamin Butler in June 1862. He later served as a United States federal judge. 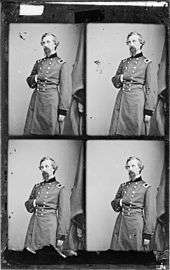 Shepley joined the army in November 1861 as a colonel of the 12th Maine Volunteer Infantry Regiment. He served as the acting military mayor of New Orleans from May 20, 1862 – July 11, 1862. This appointment lasted less than two months before Shepley was appointed military governor of the occupied parishes of Louisiana from 1862–1864, with the rank of brigadier general. Shepley later served as the first military governor of Richmond, Virginia, the Confederate capital.

After the war, Shepley returned to his private practice in Portland in 1865. He was a member of the Maine House of Representatives from 1866 to 1867, and continued in private practice until 1869. On December 8, 1869, Shepley was nominated by President Ulysses S. Grant to a new seat on the United States circuit court for the First Circuit created by 16 Stat. 44. He was confirmed by the United States Senate on December 22, 1869, and received his commission the same day. He continued in that office until his death.