George MacDonald (10 December 1824 – 18 September 1905) was a Scottish author, poet, and Christian minister. He was a pioneering figure in the field of fantasy literature and the mentor of fellow writer Lewis Carroll. His writings have been cited as a major literary influence by many notable authors including W. H. Auden, C. S. Lewis, J. R. R. Tolkien,[1] Walter de la Mare,[2] E. Nesbit and Madeleine L'Engle.[1] C. S. Lewis wrote that he regarded MacDonald as his "master": "Picking up a copy of Phantastes one day at a train-station bookstall, I began to read. A few hours later," said Lewis, "I knew that I had crossed a great frontier." G. K. Chesterton cited The Princess and the Goblin as a book that had "made a difference to my whole existence".

Elizabeth Yates wrote of Sir Gibbie, "It moved me the way books did when, as a child, the great gates of literature began to open and first encounters with noble thoughts and utterances were unspeakably thrilling."[3]

Even Mark Twain, who initially disliked MacDonald, became friends with him, and there is some evidence that Twain was influenced by MacDonald.[4] Christian author Oswald Chambers (1874–1917) wrote in Christian Disciplines, vol. 1, (pub. 1934) that "it is a striking indication of the trend and shallowness of the modern reading public that George MacDonald's books have been so neglected".

In addition to his fairy tales, MacDonald wrote several works on Christian apologetics including several that defended his view of Christian Universalism.

George MacDonald was born on 10 December 1824 at Huntly, Aberdeenshire, Scotland. His father, a farmer, was one of the MacDonalds of Glen Coe, and a direct descendant of one of the families that suffered in the massacre of 1692.[5][6] The Doric dialect of the Aberdeenshire area appears in the dialogue of some of his non-fantasy novels.

MacDonald grew up in an unusually literate environment: one of his maternal uncles was a notable Celtic scholar, editor of the Gaelic Highland Dictionary and collector of fairy tales and Celtic poetry. His paternal grandfather had supported the publication of an Ossian edition, the controversial Celtic text believed by some to have contributed to the starting of European Romanticism. MacDonald’s step-uncle was a Shakespeare scholar, and his paternal cousin another Celtic academic. Both his parents were readers, his father harbouring predilections for Newton, Burns, Cowper, Chalmers, Coleridge and Darwin, to quote a few, while his mother had received a classical education which included multiple languages.[7]

MacDonald grew up in the Congregational Church, with an atmosphere of Calvinism. However, MacDonald's family was atypical, with his paternal grandfather a Catholic-born, fiddle-playing, Presbyterian elder; his paternal grandmother an Independent church rebel; his mother was a sister to the Gallic-speaking radical who became Moderator of the disrupting Free Church, while his step-mother, to whom he was also very close, was the daughter of a Celtic Episcopalian minister.[8] MacDonald himself appears to have never felt comfortable with some aspects of Calvinist doctrine; indeed, legend has it that when the doctrine of predestination was first explained to him, he burst into tears (although assured that he was one of the elect). Later novels, such as Robert Falconer and Lilith, show a distaste for the idea that God's electing love is limited to some and denied to others.

MacDonald graduated from the University of Aberdeen, and then went to London, studying at Highbury College for the Congregational ministry. 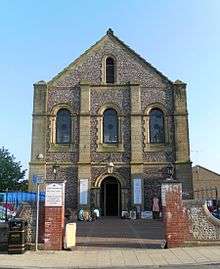 MacDonald was the pastor of Trinity Congregational Church, Arundel from 1850.

In 1850 he was appointed pastor of Trinity Congregational Church, Arundel, but his sermons (preaching God's universal love and the possibility that none would, ultimately, fail to unite with God) met with little favour and his salary was cut in half. Later he was engaged in ministerial work in Manchester. He left that because of poor health, and after a short sojourn in Algiers he settled in London and taught for some time at the University of London. MacDonald was also for a time editor of Good Words for the Young, and lectured successfully in the United States during 1872–1873.

George MacDonald's best-known works are Phantastes, The Princess and the Goblin, At the Back of the North Wind, and Lilith, all fantasy novels, and fairy tales such as "The Light Princess", "The Golden Key", and "The Wise Woman". "I write, not for children," he wrote, "but for the child-like, whether they be of five, or fifty, or seventy-five."[9] MacDonald also published some volumes of sermons, the pulpit not having proved an unreservedly successful venue.

MacDonald also served as a mentor to Lewis Carroll (the pen-name of Rev. Charles Lutwidge Dodgson); it was MacDonald's advice, and the enthusiastic reception of Alice by MacDonald's many sons and daughters, that convinced Carroll to submit Alice for publication.[10] Carroll, one of the finest Victorian photographers, also created photographic portraits of several of the MacDonald children.

MacDonald was also friends with John Ruskin and served as a go-between in Ruskin's long courtship with Rose La Touche.[10]

MacDonald was acquainted with most of the literary luminaries of the day; a surviving group photograph shows him with Tennyson, Dickens, Wilkie Collins, Trollope, Ruskin, Lewes, and Thackeray. While in America he was a friend of Longfellow and Walt Whitman. 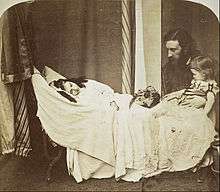 In 1877 he was given a civil list pension. From 1879 he and his family moved to Bordighera[11] in a place much loved by British expatriates, the Riviera dei Fiori in Liguria, Italy, almost on the French border. In that locality there also was an Anglican church, which he attended. Deeply enamoured of the Riviera, he spent there 20 years, writing almost half of his whole literary production, especially the fantasy work.[12] In that Ligurian town MacDonald founded a literary studio named Casa Coraggio (Bravery House), which soon became one of the most renowned cultural centres of that period, well attended by British and Italian travellers, and by locals. In that house representations were often held of classic plays, and readings were given of Dante and Shakespeare.[13]

In 1900 he moved into St George's Wood, Haslemere, a house designed for him by his son, Robert Falconer MacDonald, and the building overseen by his eldest son, Greville MacDonald. He died on 18 September 1905 in Ashtead, (Surrey). He was cremated and his ashes buried in Bordighera, in the English cemetery, along with his wife Louisa and daughters Lilia and Grace.

As hinted above, MacDonald's use of fantasy as a literary medium for exploring the human condition greatly influenced a generation of such notable authors as C. S. Lewis (who featured him as a character in his The Great Divorce),[14] J. R. R. Tolkien, and Madeleine L'Engle. MacDonald's non-fantasy novels, such as Alec Forbes, had their influence as well; they were among the first realistic Scottish novels, and as such MacDonald has been credited with founding the "kailyard school" of Scottish writing.[15]

MacDonald rejected the doctrine of penal substitutionary atonement as developed by John Calvin, which argues that Christ has taken the place of sinners and is punished by the wrath of God in their place, believing that in turn it raised serious questions about the character and nature of God. Instead, he taught that Christ had come to save people from their sins, and not from a Divine penalty for their sins. The problem was not the need to appease a wrathful God but the disease of cosmic evil itself. George MacDonald frequently described the Atonement in terms similar to the Christus Victor theory. MacDonald posed the rhetorical question, "Did he not foil and slay evil by letting all the waves and billows of its horrid sea break upon him, go over him, and die without rebound—spend their rage, fall defeated, and cease? Verily, he made atonement!" 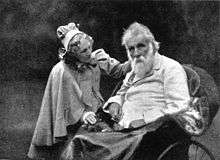 George MacDonald with his wife Louisa in 1901 at their 50th wedding anniversary.

MacDonald was convinced that God does not punish except to amend, and that the sole end of His greatest anger is the amelioration of the guilty.[17] As the doctor uses fire and steel in certain deep-seated diseases, so God may use hell-fire if necessary to heal the hardened sinner. MacDonald declared, "I believe that no hell will be lacking which would help the just mercy of God to redeem his children."[18] MacDonald posed the rhetorical question, "When we say that God is Love, do we teach men that their fear of Him is groundless?" He replied, "No. As much as they fear will come upon them, possibly far more. ... The wrath will consume what they call themselves; so that the selves God made shall appear."

However, true repentance, in the sense of freely chosen moral growth, is essential to this process, and, in MacDonald's optimistic view, inevitable for all beings (see universal reconciliation). He recognised the theoretical possibility that, bathed in the eschatological divine light, some might perceive right and wrong for what they are but still refuse to be transfigured by operation of God's fires of love, but he did not think this likely.

In this theology of divine punishment, MacDonald stands in opposition to Augustine of Hippo, and in agreement with the Greek Church Fathers Clement of Alexandria, Origen, and St. Gregory of Nyssa, although it is unknown whether MacDonald had a working familiarity with Patristics or Eastern Orthodox Christianity. At least an indirect influence is likely, because F. D. Maurice, who influenced MacDonald, knew the Greek Fathers, especially Clement, very well. MacDonald states his theological views most distinctly in the sermon "Justice"[19] found in the third volume of Unspoken Sermons.

In his introduction to George MacDonald: An Anthology, C. S. Lewis speaks highly of MacDonald's theology:

"This collection, as I have said, was designed not to revive MacDonald's literary reputation but to spread his religious teaching. Hence most of my extracts are taken from the three volumes of Unspoken Sermons. My own debt to this book is almost as great as one man can owe to another: and nearly all serious inquirers to whom I have introduced it acknowledge that it has given them great help—sometimes indispensable help toward the very acceptance of the Christian faith.

... I know hardly any other writer who seems to be closer, or more continually close, to the Spirit of Christ Himself. Hence his Christ-like union of tenderness and severity. Nowhere else outside the New Testament have I found terror and comfort so intertwined. ... In making this collection I was discharging a debt of justice. I have never concealed the fact that I regarded him as my master; indeed I fancy I have never written a book in which I did not quote from him. But it has not seemed to me that those who have received my books kindly take even now sufficient notice of the affiliation. Honesty drives me to emphasize it."