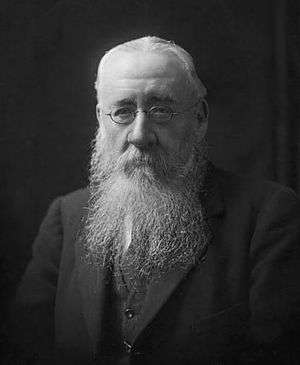 Born in Lottery Hall, Southampton, he was educated at King's College School, London, and at Merton College, Oxford where he achieved a first class BA degree in Classical Mods, (1865), and a second class in literae humaniores (1867). He left Oxford in 1868 having failed to obtain a fellowship, and briefly became a master at the Manchester Grammar School before spending six years in Guernsey as senior classical master of Elizabeth College, where he began his literary career by submitting his first reviews to The Academy. From 1874 until he returned to London in 1876 he was headmaster of the Elgin Educational Institute, with a brief period in 1877 on the Manchester Guardian. For ten years he was actively engaged in journalism, becoming an important member of the staff of the Saturday Review. Some of the critical essays contributed to the literary journals were afterwards collected in his Essays in English Literature, 1780-1860 (2 vols., 1890–1895), Essays on French Novelists (1891), Miscellaneous Essays (1892), Corrected Impressions (1895). In 1895 he became professor of rhetoric and English literature at the University of Edinburgh, a position he held until 1915. He retired to 1A Royal Crescent, Bath, Somerset and died there in 1933.[1]

1A Royal Crescent has been the subject of a complete restoration and renovation programme by the Bath Preservation Trust during 2012 to reincorporate it into 1 Royal Crescent, of which it was the original servants' quarters. It will open to visitors for the very first time in its history in 2013. An exhibition celebrating Saintsbury's life will be held in the house during 2014.

His first book, A Primer of French Literature (1880), and his Short History of French Literature (1882), were followed by a series of editions of French classics and of books and articles on the history of French literature, which made him the most prominent English authority on the subject. His studies in English literature were no less comprehensive, and included the valuable revision of Sir Walter Scott's edition of John Dryden's Works (Edinburgh, 18 vols., 1882–1893), Dryden (1881) in the "English Men of Letters" series, History of Elizabethan Literature (1887), History of Nineteenth Century Literature (1896), A Short History of English Literature (1898, 3rd ed. 1903 - and a book that continued to be reprinted into at least the 1960s), an edition of the Minor Poets of the Caroline Period (2 vols., 1905–1906), a collection of rare poems of great value, and editions of English classics. He coined the term "Janeite" for a fan of Jane Austen in his introduction to an 1894 edition of Pride and Prejudice.

At the turn of the century, Saintsbury edited and introduced an English edition of Honoré de Balzac's novel series La Comédie humaine, translated by Ellen Marriage and published in 1895-8 by J. M. Dent. He went on to edit the series of "Periods of European Literature," contributing the volumes on The Flourishing of Romance and the Rise of Allegory (1897), and The Earlier Renaissance (1901). He subsequently produced some of his most important works, A History of Criticism (3 vols., 1900–1904), with the companion volume Loci Critici, Passages Illustrative of Critical Theory and Practice (Boston, U.S.A., and London, 1903), and A History of English Prosody from the 12th Century to the Present Day (i., 1906; ii., 1908; iii., 1910); also The Later Nineteenth Century (1909). In 1925 he arranged for the publication of a lost recipe book by Anne Blencoe which had been rediscovered 200 years after her death in Weston Hall. Saintsbury wrote a short introduction to the reissued book.[2]

Although Saintsbury was best known as a scholar during his lifetime, he is perhaps best remembered today for his Notes on a Cellar-Book (1920), one of the great testimonials to drink and drinking in wine literature. When he was close to death, André Simon arranged a dinner in his honour. Although Saintsbury did not attend, this was the start of the Saintsbury Club, men of letters and members of the wine trade who continue to have dinners to this day.