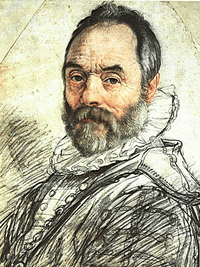 Giambologna (1529 – 13 August 1608) — born Jean Boulogne (and incorrectly known as Giovanni da Bologna or Giovanni Bologna) — was a Flemish sculptor based in Italy, celebrated for his marble and bronze statuary in a late Renaissance or Mannerist style. 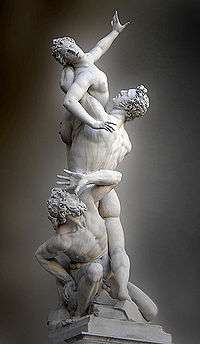 The Rape of the Sabine Women (1574–82), Florence. The title was only assigned after completion.

Giambologna was born in Douai, Flanders (now in France), in 1529. After youthful studies in Antwerp with the architect-sculptor Jacques du Broeucq,[1] he moved to Italy in 1550, and studied in Rome. Giambologna made detailed study of the sculpture of classical antiquity. He was also much influenced by Michelangelo, but developed his own Mannerist style, with perhaps less emphasis on emotion and more emphasis on refined surfaces, cool elegance and beauty. Pope Pius IV gave Giambologna his first major commission, the colossal bronze Neptune and subsidiary figures for the Fountain of Neptune (the base designed by Tommaso Laureti, 1566) in Bologna. Giambologna spent his most productive years in Florence, where he had settled in 1553. Ten years later, he was named a member (Accademico) of the prestigious Accademia delle Arti del Disegno, just founded by the Duke Cosimo I de' Medici, on 13 January 1563, under the influence of the painter-architect Giorgio Vasari, becoming also one of the Medici's most important court sculptors. He died in Florence at the age of 79 — the Medici had never allowed him to leave Florence, as they rightly feared that either the Austrian or Spanish Habsburgs would entice him into permanent employment. He was interred in a chapel he designed himself in the Santissima Annunziata. 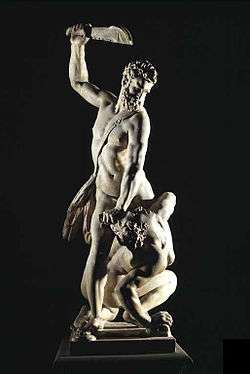 Samson Slaying a Philistine, about 1562.

Giambologna became well known for a fine sense of action and movement, and a refined, differentiated surface finish. Among his most famous works are the Mercury (of which he did four versions), poised on one foot, supported by a zephyr. The god raises one arm to point heavenwards, in a gesture borrowed from the repertory of classical rhetoric[2] that is characteristic of Giambologna's maniera.

His other most famous work is the Rape of the Sabine Women (1574–82) a marble sculpture which is featured prominently in the Loggia dei Lanzi in Florence's Piazza della Signoria. This impressive sculpture which includes three full figures was carved from a single piece of marble. Giambologna carved it without a subject in mind, and the name Rape of the Sabine Women was given after it was in place in the Loggia. The sculpture was produced for Francesco Medici, Grand Duke of Tuscany. Another of his marbles, Hercules Slaying a Centaur was also placed in the Loggia dei Lanzi in 1599.[3]

Giambologna's several depictions of Venus established a canon of proportions and set models for the goddess's representation that were influential for two generations of sculptors, in Italy and in the North. He created allegories strongly promoting Medicean political propaganda, such as Florence defeating Pisa and, less overtly, Samson Slaying a Philistine, for Francesco de' Medici (1562).[4]

The equestrian statue of Cosimo I de' Medici also in Florence, was completed by his studio assistant Pietro Tacca.

Giambologna provided as well as many sculptures for garden grottos and fountains in the Boboli Gardens of Florence and at Pratolino, and the bronze doors of the cathedral of Pisa. For the grotto of the Villa Medicea of Castello he sculpted a series of studies of individual animals, from life, which may now be viewed at the Bargello. Small bronze reductions of many of his sculptures were prized by connoisseurs at the time and ever since, for Giambologna's reputation has never suffered eclipse.

Giambologna was an important influence on later sculptors through his pupils Adriaen de Vries and Pietro Francavilla who left his atelier for Paris in 1601, as well as Pierre Puget who spread Giambologna's influence throughout Northern Europe, and in Italy on Pietro Tacca, who assumed Giambologna's workshop in Florence, and in Rome on Gian Lorenzo Bernini and Alessandro Algardi.