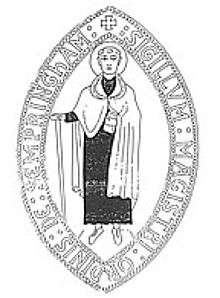 Seal of the Master of the Order of Sempringham

The Gilbertine Order of Canons Regular was founded around 1130 by Saint Gilbert in Sempringham, Lincolnshire, where Gilbert was the parish priest. It was the only completely English religious order and came to an end in the 16th century at the time of the Dissolution of the Monasteries. 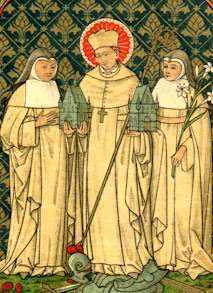 Gilbert initially established a community for enclosed contemplative nuns. He accepted seven women whom he had taught in the village school and in 1131 founded an order of nuns based on the Cistercian Rule.[1] Gilbert set up buildings and a cloister for them against the north wall of the church, which stood on his land at Sempringham, and gave them a rule of life, enjoining upon them chastity, humility, obedience, and charity. Their daily necessaries were passed to them through a window by some girls chosen by Gilbert from among his people.[2]

As the serving maids requested that they too might have a dress and rule of life, on the advice of William, abbot of Rievaulx, he decided to add lay sisters to the community.[2] Eventually Gilbert added lay brothers to work the fields. In 1139 the small order opened its first new foundation on the island of Haverholm, a gift from Alexander, Bishop of Lincoln. Each Gilbertine house now practically consisted of four communities, one of nuns, one of canons, one of lay sisters, and one of lay brothers.[1] Over the years, more and more new foundations were established.

In 1147 he left England for Continental Europe to seek assistance, and approached the Cistercian Order at its major house in Cîteaux to take on the running of his foundations. The Cistercians declined, apparently because they felt unable to administer houses for both men and women, but Pope Eugenius III, himself a Cistercian, intervened to ask the abbot, Saint Bernard of Clairvaux, to assist Gilbert in drawing up Institutes for a new Order, which combined Benedictine and Cistercian influences. Pope Eugenius then appointed Gilbert as the first Master of the Order of Sempringham or Gilbertines. Gilbert returned to England in 1148, and completed the order, by appointing canons, who lived according to variant of the Augustinian rule, to serve his community as priests, and to help him in the work of administration.[2]

The Gilbertines wore a habit comprising a black cassock, with a white hood and scapular lined with lamb's wool,[1] so that when viewed from God's perspective they would appear as a white cross on a black background. The Crosier Canons, who are still extant, wear the reverse of this habit, black over white.

Each Gilbertine priory had one church, divided unequally by a wall. The nuns had the larger part, and the canons the smaller. The latter would join the nuns only to celebrate mass. From the church, the nunnery normally stood to the north and the canons' lodgings to the south.

One source of perpetual pain for Gilbert were the lay brothers. These were chosen from lower class peasant families, because they needed to spend their days labouring in the fields. The problem was that they did not take well to discipline and needed a firm hand to guide them. There seem to have been many instances of insubordination and of scandalous behaviour from them.

The Nun of Watton

In the mid-twelfth century, a girl was brought to Watton Priory as a child, but had no real religious vocation. This Nun of Watton became pregnant by a lay brother, who fled, but he was brought back for punishment. The other nuns then forced the girl to castrate the man. They forced the removed parts down the pregnant nun's throat and chained her up, whereupon she mysteriously lost her baby. According to one account Henry Murdac, Archbishop of York, the man who had brought her to the priory, appeared with two heavenly women who cleansed the girl's body of her sin and of her pregnancy, and her chains fell off. Aelred of Rievaulx was called in to investigate and declared the event to be a miracle. However, he was also intensely critical of the nun's fellow sisters and of Gilbert of Sempringham himself for their lack of pastoral care.

Towards the end of Gilbert's life, when he was around ninety years old, some of the lay brothers at Sempringham rose up against him, complaining of too much work and too little food. The rebels, led by two skilled craftsmen, received money from both religious and secular supporters and took their case to Rome. Pope Alexander III ruled in Gilbert's favour, but the living conditions of the lay brothers were improved thereafter.[3]

The Gilbertine order was always popular in England and Wales. Its houses were the final homes of the last of the Welsh royal family, young daughters, after the rest had been defeated and killed in the 1280s. Principal among these was Gwenllian who was sent to Sempringham Priory and a monument commemorating her was placed near the Priory site in the 1990s. Many English kings gave the order generous charters, and yet it always had financial problems. By the end of the 15th century, the Order was greatly impoverished, and King Henry VI exempted all of its houses from paying taxes and from any other sort of payment. He could not force his successors to do the same. 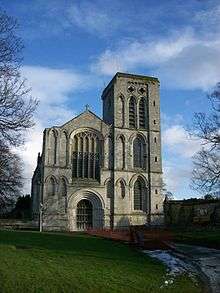 By the time of the Dissolution, there were twenty-six houses of Gilbertines, but only four of these were ranked as "greater houses", having annual incomes above £200. Following the Dissolution of the Lesser Monasteries Act of 1536, these houses gave in to King Henry VIII in 1538 without a fight, surrendering "of their own free will". Each nun and canon then received a pension for the rest of their lives. The Gilbertines were the one truly English order, so the Dissolution marked their permanent end.

The last Master of the Order, Robert Holgate, became Bishop of Llandaff and was translated to become Archbishop of York in 1545.

The Gilbertine legacy is fairly small; only fifteen extant manuscripts are associated with the Order, originating from only five of the Gilbertine houses. Four additional works ascribed to Gilbertines, but not surviving in Gilbertine copies, include the Vita of Gilbert of Sempringham, the Gilbertine Rule, the so-called 'Sempringham Continuation' to Le Livere de Reis Engleterre, and the works of Robert Mannyng.

The remains of one Gilbertine monastery, Malton Priory, have been incorporated into the parish church at Malton in North Yorkshire. The original monastery was established around 1150, and, though it has suffered considerable abuse, the surviving fragment remains impressive. Although the Priory at Sempringham was destroyed, the adjacent and contemporary parish church of St Andrew remains and some evidence of mediaeval decoration is still to be found.

In 1983, following celebrations of the nine hundredth anniversary of Gilbert's birth, a number of lay people in the East Midlands of England undertook to sustain the memory and work of Gilbert and the Gilbertine Order by establishing a new secular Order. The Oblates of St Gilbert exist to promote the Gilbertine contemplative spirit and to foster interest in the study of Gilbert and his Order. They are supported by the Cistercian monastery of Mount St Bernard Abbey in Leicestershire.

In about 1998 a priest of the Roman Catholic Archdiocese of São Paulo in Brazil, Carlos Aparicido Marchesani, visited the Gilbertine Oblates as he had had a devotion to Saint Gilbert since a seminarian in the United States. He obtained permission from his bishop to found a small religious community, the Fraternidade São Gilbert, ad experimentum, which was set up near São Paulo.[4] This experimental community was dissolved in 2012.[5]