The Giralda (Spanish: La Giralda ; Arabic: الخيرالدة‎‎) is the bell tower of the Seville Cathedral in Seville, Spain.[1] It was originally built as a minaret during the Moorish period, with a Renaissance style top subsequently added by Spaniards. The Giralda was registered in 1987 as a World Heritage Site by UNESCO along with the Alcazar and the General Archive of the Indies. The tower is 104.1 m (342 ft) in height and remains one of the most important symbols of the city, as it has been since medieval times.

Construction of the tower began under architect Ahmad Ben Baso in 1184. After Ben Baso's death, other architects continued work on the tower. The mathematician and astronomer Jabir ibn Aflah (or Geber) is also often credited with the tower's design. The tower was completed March 10, 1198 with the installation of copper spheres on the tower's top. The Almohads built similar towers in what are now Spain and Morocco during this period. The tower of the Koutoubia Mosque in Marrakesh served as a model for the Giralda and its sister, the Hassan Tower in Rabat. 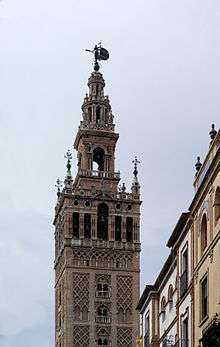 View of Giralda from cathedral.

The tower's first two-thirds is a former minaret from the Almohad period of Seville, the upper third Spanish Renaissance architecture. After Seville was taken by the Christians in 1248 during the Reconquista, the city's mosque was converted into a church. This structure was badly damaged in a 1356 earthquake, and by 1401 the city began building the current cathedral, one of the largest churches in the world and an outstanding example of the Gothic and Baroque architectural styles. The tower survived the earthquake, but the copper spheres that originally topped the tower fell during a 1365 earthquake, and the spheres were replaced with a cross and bell. The new cathedral incorporated the tower as a bell tower and eventually built it higher during the Renaissance under architect Hernán Ruiz the Younger, who was commissioned to work on the tower in 1568. This newer section of the tower contains a large inscription of Seville's motto, NO8DO, spoken No me ha dejado, meaning "[Seville] has not abandoned me." Alfonso X of Castile gave the motto to the city when it continued to support his rule during an insurrection. Covering the top of the tower is the "Lily section" which surrounds the enclosure with the bell. The statue stands 4 m (13 feet) in height – 7 m (23 ft) with the pedestal – and sit on top of the tower from its installation in 1568.

The oldest person to have successfully climbed the bell tower was Joan Vane, aged 93,who visited Giralda on October 15th 2016.

The base at street level is a square of 13.6 m on the side and which sits on a solid foundation which is a bit wider, 15~16 m and about 5 m deep. The foundation is built with solid, rectangular stones, some taken and reused from the Roman wall nearby.[2]

The part which corresponds to the original Moorish minaret is about 51 m high, with the Christian addition it is 98.5 m high and taking into account the wind vane it is 104 m high. The wind vane, which gives name to the building, is over 4 m tall, 7 m including the base.

The tower has a ramp with 35 segments wide and tall enough to allow a person to ride on horseback to the top of the Moorish tower. The Christian addition has a final stair with 17 steps leading up to the bells.

Buildings inspired by the Giralda 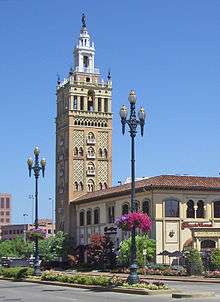 Replica of the Giralda, in Kansas City, Missouri, twinned with Seville.

Many towers have borrowed from the Giralda's design throughout history. Several church towers in the province of Seville also bear a resemblance to the tower, and may have been inspired by the Giralda. These towers, most notably those in Lebrija and Carmona, are popularly known as Giraldillas.

Numerous replicas of the Giralda have been built in the United States, mostly between 1890 and 1930:

It also featured in the 2013 video game SimCity as a landmark.

The building has also inspired buildings outside the US and Spain, such as: