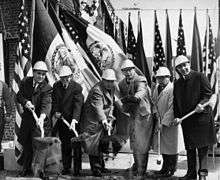 Groundbreaking, also known as cutting, sod-cutting, turning the first sod or a sod-turning ceremony, is a traditional ceremony in many cultures that celebrates the first day of construction for a building or other project. Such ceremonies are often attended by dignitaries such as politicians and businessmen. The actual shovel or spade used during the actual groundbreaking is often a special ceremonial shovel meant to be saved for subsequent display. Commemorative information may be subsequently engraved on the shovel.

In some places, clergy may also provide blessings, particularly if the building is being constructed by a church or religious-affiliated organization.

The term groundbreaking, when used as an adjective, may mean being or making something that has never been done, seen, or made before; "stylistically innovative works".