The Grumman Long Life Vehicle, also known by its acronym as the LLV, is an American light transport truck. The Grumman LLV was designed as a mail truck for the United States Postal Service, which is its primary user.

The Grumman LLV was specifically designed for the United States Postal Service with Grumman winning the contract for production. The main design points of the vehicle in contract competition were serviceability, handling in confined areas, and overall economical operation. As its name suggests, the Grumman LLV is easily capable of a long life, perhaps approaching twenty years of operation. The original design lifespan of the Grumman LLV specified by the U.S. Postal Service was 24 years, but in 2009 this was extended to thirty years. The body and final assembly is by Grumman, and the chassis (based on the 1983-05 S10 Blazer 2WD) is made by General Motors, with the powerplant (2.5L I-4 TBI "Iron Duke" and, in later production, General Motors 2.2L I-4 iron block/aluminum head engine), instrument cluster and front suspension similar to those used in the Chevrolet S-10 pickup. 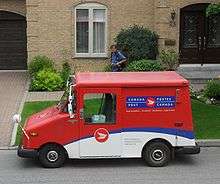 A Grumman LLV of the Canada Post, seen here in Montreal, Quebec, in June 2010.

In the United States, the Grumman LLV is the most common vehicle used by letter carriers for curbside and residential delivery of mail, replacing the previous standard letter-carrier vehicle, the Jeep DJ-5. Curbside delivery from a driver seated in a vehicle to a curbside mailbox is sometimes termed "mounted delivery", in contrast to walking delivery.[5] The Grumman LLV entered service in 1987. The USPS purchased over 100,000 of these vehicles, of which the last was purchased in 1994.[1] Approximately 140,000 LLVs are in the USPS delivery fleet.[6][7] A number were also sold to Canada, Mexico, and several other countries.

Like the older postal-service Jeep DJ-5, the Grumman LLV features a right-handed driver's position, in contrast to the typical left-hand drive position of vehicles in North America. It also features a large metal tray, which is able to hold three trays of letter mail, mounted where a passenger seat would normally be. This arrangement positions the driver on the side of the vehicle closest to the curb, enabling the carrier to easily grab sorted mail and place it into mailboxes without having to leave the seat (See: Video example). Other notable features are an exceptionally tight turning radius[8] and a low-geared, 3 speed transmission[2] for hauling heavy cargo. The LLV has a 1,000-pound (450 kg) cargo capacity.[1]

The Grumman LLV's average EPA fuel economy is 17 miles per U.S. gallon (16 mpg city/18 mpg highway).[2] In actual use by the USPS, which includes extensive stop-and-go driving for residential delivery, average fuel economy is about 10 mpg.[9] Like other U.S. Postal Service vehicles before it, the Grumman LLV lacks license plates. It uses a U.S. Postal Service serial number instead. 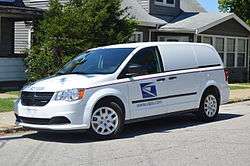 Because the United States Postal Service owns over 100,000 Grumman LLVs, of which the oldest are reaching the end of their "lifespan", the USPS has been looking into replacing or retrofitting the LLVs. In fiscal year 2009, the USPS spent $524 million to repair its fleet of Grumman LLVs, and estimated that it would cost $4.2 billion to replace the entire fleet.[10] In some areas LLVs have been replaced with minivans,[7] which tend to be much more comfortable for postal workers, especially in extreme climates.

Canada Post also adopted the Grumman LLV, but around 2008, it began studying whether to refurbish, upgrade, or replace its fleet. On March 18, 2010, Canada Post and Ford Motor Company announced that Canada Post would purchase a fleet of Ford Transit Connect vans.[12]

The LLV had a unique footprint. The front wheels (based on the S10 2 wheel drive truck) had narrower spacing than the rear wheels (using the rear axle from the S10 4 wheel drive). The front of the vehicle also had low ground clearance. While this had advantages, there were trade offs. The vehicle was tested successfully in warmer climates, but when actually used in places with substantial snow fall, they became difficult to control and were poorly adapted to those conditions.[13]

On January 20, 2015, the USPS released solicitation RFI-NGDV for the Next Generation Delivery Vehicle.[14] Potential bidders had until March 5, 2015 to submit comments and pre-qualification responses. The USPS was to then select companies to receive the RFP for prototype development. On February 13, 2015, it was announced that General Motors was actively pursuing this new contract, which would have them provide the USPS with 180,000 new vehicles at a cost of at least $5 billion.[15] On September 22, 2016, the U.S. Post office awarded the NGDV Prototype Contract to VT Hackney and Workhorse Group Team as one of the six manufacturers to build and deliver prototype vehicles for the NGDV Program. VT Hackney will build the body of the prototype vehicles while Workhorse Group will provide the chassis and powertrain. The VT Hackney/Workhorse prototypes will be delivered as both two-wheel drive and four-wheel drive vehicles.[16]