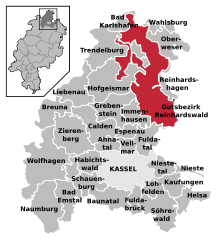 The Gutsbezirk Reinhardswald is an unincorporated area in the Kassel district in the state of Hesse in Germany. It encompasses an area of 184.16 square kilometres (71.10 sq mi)[1] and is thus the second largest village in Hesse by area after the city of Frankfurt.[2] The Gutsbezirk Reinhardswald consists of nearly the whole area of the Reinhardswald. It is administered by the leader of the local forest authority, seated in nearby Reinhardshagen,[1] who is instated by the district and whose duties include taking in taxes, garbage disposal and maintaining the civil registry.[3]

Although the Gutsbezirk Reinhardswald is officially uninhabitated, two people inhabit and operate the Tillyschanze restaurant, next to the observation tower of the same name above the city of Hann. Münden, located in Lower Saxony. The border between the states of Hesse and Lower Saxony runs between the restaurant and the observation tower. The territory has no postal code as it was forgotten about when the postal codes were assigned in 1993, as such no mail is delivered to the inhabitants.[2] The official address, as given by the authorities, is Tillyschanze 1, 00000 Reinhardswald.[2]

Connection to the electricity and water network is provided by the city of Hann. Münden, who also built a road to the restaurant. The inhabitants had to privately contract a company from Lower Saxony to take care of garbage disposal.[2] The two inhabitants have to vote in the nearby electoral district of Reinhardshagen, ten kilometers away from the restaurant.[2]

This article is issued from Wikipedia - version of the 11/22/2015. The text is available under the Creative Commons Attribution/Share Alike but additional terms may apply for the media files.