Under HTTP 1.0, there is no official specification for how keepalive operates. It was, in essence, added to an existing protocol. If the client supports keep-alive, it adds an additional header to the request:

Then, when the server receives this request and generates a response, it also adds a header to the response:

Following this, the connection is not dropped, but is instead kept open. When the client sends another request, it uses the same connection. This will continue until either the client or the server decides that the conversation is over, and one of them drops the connection.

In HTTP 1.1, all connections are considered persistent unless declared otherwise.[1] The HTTP persistent connections do not use separate keepalive messages, they just allow multiple requests to use a single connection. However, the default connection timeout of Apache httpd 1.3 and 2.0 is as little as 15 seconds[2][3] and just 5 seconds for Apache httpd 2.2 and above.[4][5] The advantage of a short timeout is the ability to deliver multiple components of a web page quickly while not consuming resources to run multiple server processes or threads for too long.[6]

These advantages are even more important for secure HTTPS connections, because establishing a secure connection needs much more CPU time and network round-trips.

According to RFC 7230, section 6.4, "a client ought to limit the number of simultaneous open connections that it maintains to a given server". The previous version of the HTTP/1.1 specification stated specific maximum values but in the words of RFC 7230 "this was found to be impractical for many applications... instead... be conservative when opening multiple connections". These guidelines are intended to improve HTTP response times and avoid congestion. If HTTP pipelining is correctly implemented, there is no performance benefit to be gained from additional connections, while additional connections may cause issues with congestion.[7]

Use in web browsers 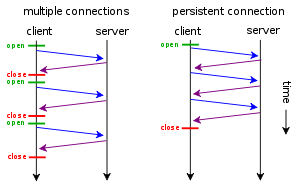 Schema of multiple vs. persistent connection.

All modern web browsers use persistent connections, including Google Chrome, Firefox, Internet Explorer (since 4.01), Opera (since 4.0)[8] and Safari.

In Firefox, the number of simultaneous connections can be customized (per-server, per-proxy, total). Persistent connections time out after 115 seconds (1.92 minutes) of inactivity which is changeable via the configuration.[11]