"Haakon I" redirects here. For the King of Sweden, see Haakon I of Sweden.

Haakon was the youngest son of King Harald Fairhair and Thora Mosterstang. He was born on the Håkonshella peninsula in Hordaland. King Harald determined to remove his youngest son out of harm's way and accordingly sent him to the court of King Athelstan of England. Haakon was fostered by King Athelstan, as part of an agreement made by his father, for which reason Haakon was nicknamed Adalsteinfostre.[4] The English court introduced him to the Christian religion. On the news of his father's death, King Athelstan provided Haakon with ships and men for an expedition against his half-brother Eric Bloodaxe, who had been proclaimed king of Norway.[5][6]

At his arrival back in Norway, Haakon gained the support of the landowners by promising to give up the rights of taxation claimed by his father over inherited real property. Eric Bloodaxe soon found himself deserted on all sides, and saved his own and his family's lives by fleeing from the country. Eric fled to the Orkney Islands and later to the Kingdom of Jorvik, eventually meeting a violent death at Stainmore, Westmorland, in 954 along with his son, Haeric.[7]

Haakon set at the knees of King Athelstan (from Stories of the Vikings (1908) by Mary MacGregor, illustrated by Monro S. Orr)

In 953, Haakon had to fight a fierce battle (Slaget på Blodeheia ved Avaldsnes) at Avaldsnes against the sons of Eric Bloodaxe (Eirikssønnene). Haakon won the battle at which Eric's son Guttorm died. One of Haakon's most famous victories was the Battle of Rastarkalv (Slaget på Rastarkalv) near Frei in 955 at which Eric's son, Gamle, died. By placing ten standards far apart along a low ridge, he gave the impression that his army was bigger than it actually was. He managed to fool Eric’s sons into believing that they were out-numbered. The Danes fled and were slaughtered by Haakon’s army. The sons of Eric returned in 957, with support from King Gorm the Old, King of Denmark, but were again defeated by Haakon's effective army system.[8][9]

Three of the surviving sons of Eric Bloodaxe landed undetected on the coast of Hordaland in 961 and surprised the king at his residence in Fitjar. Haakon was mortally wounded at the Battle of Fitjar (Slaget ved Fitjar) after a final victory over Eric’s sons. The King’s arm was pierced by an arrow and he died later from his wounds. He was buried in the burial mound (Håkonshaugen) in the village of Seim in Lindås municipality in the county of Hordaland. Upon his death his court poet, Eyvindr Skáldaspillir, composed a skaldic poem Hákonarmál about the fall of the King in battle and his reception into Valhalla.[10] [11]

After Haakon's death, Harald Greycloak, the eldest surviving son of Eric Bloodaxe, ascended the throne as King Harald II, although he had little authority outside Western Norway. Subsequently, the Norwegians were tormented by years of war. In 970, King Harald was tricked into coming to Denmark and killed in a plot planned by Haakon Sigurdsson, who had become an ally of King Harald Bluetooth.[12][13] 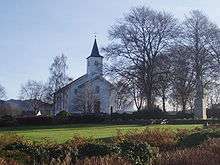 Ancestors from the sagas

This article contains information from