Sir Harold Delf Gillies (17 June 1882 – 10 September 1960) was a New Zealand-born, and later London-based, otolaryngologist who is widely considered the father of plastic surgery.[1]

Gillies was born in Dunedin, New Zealand. He studied medicine at Gonville and Caius College, Cambridge University, where despite a stiff elbow sustained sliding down the banisters at home as a child he was a rowing blue and participated at the 1904 Boat Race.

Walter Yeo, a sailor injured at the Battle of Jutland, is assumed to be the first person to receive plastic surgery in 1917. The photograph shows him before (right) and after (left) receiving a flap surgery performed by Gillies.

Following the outbreak of World War I he joined the Royal Army Medical Corps. Initially posted to Wimereux, near Boulogne, he acted as medical minder to a French-American dentist, Valadier, who was not allowed to operate unsupervised but was attempting to develop jaw repair work. Gillies, eager after seeing Valadier experimenting with nascent skin graft techniques, then decided to leave for Paris, to meet the renowned surgeon Hippolyte Morestin. He saw him remove a tumour on a patient's face, and cover it with jaw skin taken from the patient. Gillies became enthusiastic about the work and on his return to England persuaded the army's chief surgeon, Arbuthnot-Lane, that a facial injury ward should be established at the Cambridge Military Hospital, Aldershot.

This rapidly proved inadequate and a new hospital devoted to facial repairs was developed at Sidcup. The Queen's Hospital opened in June 1917 and with its convalescent units provided over 1,000 beds. There Gillies and his colleagues developed many techniques of plastic surgery; more than 11,000 operations were performed on over 5,000 men (mostly soldiers with facial injuries, usually from gunshot wounds). The hospital, later to become Queen Mary's Hospital, was at Frognal House (the birthplace and property of Thomas Townshend, Lord Sydney after whom Sydney, Australia was named).

For his war services Gillies was knighted in the Birthday Honours list of June 1930. William Arbuthnot-Lane commented, "Better late than never". 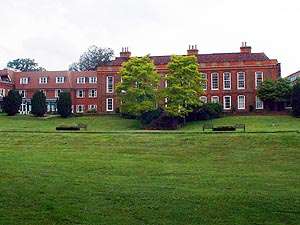 Between the wars Gillies developed a substantial private practice with Rainsford Mowlem, including many famous patients, and travelled extensively, lecturing, teaching and promoting the most advanced techniques worldwide.

In 1930 Gillies invited his cousin, Archibald McIndoe to join the practice, and also suggested he apply for a post at St Bartholomew's Hospital. This was the point at which McIndoe became committed to plastic surgery, in which he too became pre-eminent.

During World War II Gillies acted as a consultant to the Ministry of Health, the RAF and the Admiralty. He organised plastic surgery units in various parts of Britain and inspired colleagues to do the same, including pioneering plastic surgeon Stewart Harrison who founded the plastic surgery unit at Wexham Park Hospital, Berkshire.[2] His own work continued at Rooksdown House, part of the Park Prewett Hospital, Basingstoke. During this period, and after the war, he trained many doctors from Commonwealth nations in plastic surgery.

Instead of retiring at the end of the Second World War Gillies had to keep working as he had insufficient savings.

Gillies made a visit to New Zealand in 1956 after an absence of 51 years.

Gilles suffered a slight cerebral thrombosis while undertaking a major operation at the age of 78 on the damaged leg of an 18-year-old girl on 3 August 1960.[4]

Gillies married Kathleen Margaret Jackson on 9 November 1911, in London. They had four children. His eldest son, John Gillies, flew Spitfires with No. 92 Squadron RAF in World War II. John Gillies was shot down over France on 23 May 1940, and became a POW for the duration of the war. His youngest son Michael Thomas Gillies followed his father into medicine.

In addition to his career as a surgeon, he was also a champion golfer and inveterate practical joker. For many years his home was at 71 Frognal, in the heart of London's Hampstead village. A blue plaque on the front of that house now commemorates his life and work. In 2015, Gonville and Caius College, Cambridge built 12 houses and named their road Harold Gillies Close (CB5 8ZD) in his honour.

Actor Daniel Gillies is his descendant.