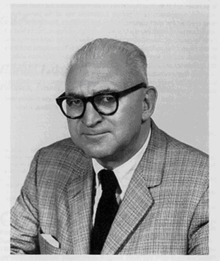 Harold Dwight Lasswell (February 13, 1902 – December 18, 1978) was a leading American political scientist and communications theorist. He was a PhD student at the University of Chicago, and he was a professor of law at Yale University. He served as president both of the American Political Science Association (APSA) and of the World Academy of Art and Science (WAAS).

According to a biographical memorial written by Gabriel Almond at the time of Lasswell's death and published by the National Academies of Sciences in 1987, Lasswell "ranked among the half dozen creative innovators in the social sciences in the twentieth century." At the time, Almond asserted that "few would question that he was the most original and productive political scientist of his time." Areas of research in which Lasswell worked included the importance of personality, social structure, and culture in the explanation of political phenomena. He was noted to be ahead of his time in employing a variety of methodological approaches that later became standards across a variety of intellectual traditions, including interviewing techniques, content analysis, para-experimental techniques, and statistical measurement.

Harold Lasswell, a political scientist by training, was a multidisciplinary academic. He could not pigeonhole his work into a single discipline, but instead celebrated the multi-faceted nature of his products. Lasswell was well associated with the disciplines of political science, psychology, and sociology – however he did not adhere to the distinction between these boundaries but instead erased the lines drawn to divide these disciplines.[1]

Lasswell is well known for his model of communication, which focuses on "Who (says) What (to) Whom (in) What Channel (with) What Effect".

He is also known for his book on aberrant psychological attributes of leaders in politics and business, Psychopathology and Politics, as well as for another book on politics, Politics: Who Gets What, When, and How.

He published his first formula in 1948.

Lasswell studied at the University of Chicago in the 1920s, and was highly influenced by the pragmatism taught there, especially as propounded by John Dewey and George Herbert Mead. However, more influential on him was Freudian philosophy, which informed much of his analysis of propaganda and communication in general. During World War II, Lasswell held the position of Chief of the Experimental Division for the Study of War Time Communications at the Library of Congress. He analyzed Nazi propaganda films to identify mechanisms of persuasion used to secure the acquiescence and support of the German populace for Hitler and his wartime atrocities. Always forward-looking, late in his life, Lasswell experimented with questions concerning astropolitics, the political consequences of colonization of other planets, and the "machinehood of humanity".

In his presidential address to the American Political Science Association, he raised the famous question, demanded by the expulsion of essences from the sciences, of whether or not we should give human rights to robots.

Lasswell's work was important in the post-World War II development of behavioralism. Similarly, his definition of propaganda was also viewed as an important development to understanding the goal of propaganda. Lasswell's studies on propaganda produced breakthroughs on the subject which broadened current views on the means and stated objectives that could be achieved through propaganda to include not only the change of opinions but also change in actions. He inspired[2] the definition given by the Institute for Propaganda Analysis: "Propaganda is the expression of opinions or actions carried out deliberately by individuals or groups with a view to influence the opinions or actions of other individuals or groups for predetermined ends through psychological manipulations."[3]

Lasswell utilized Sigmund Freud’s methodology. Upon studying in Vienna and Berlin with Theodor Reik, a devotee of Freud, Lasswell was able to appropriate Freud’s methods.[1] Lasswell built a laboratory in his social science office. It was here that he conducted experiments on volunteers, students, at the University of Chicago [1] Using this instrument, he was able to measure the participants’ emotional state to their spoken words.[1] Lasswell was furthermore able to use psychoanalytical interviewing and recording methods that he appropriated from his time of studying with Elton Mayo at Harvard University.[1]

Lasswell was a “behavioral revolution” proponent.[1] Lasswell was credited with being the founder of the field of political psychology and was the man at which the concepts of psychology and political science intersected.[1] By utilizing psychoanalytic biographies of political leaders, he expanded the base from which potential evidence could be garnered. The benefit of this contribution is that he was able to engage in another method of research – content analysis. By being able to use preexisting data, he was in a position to show that his work was not purely positivist but also stepped into the realm of interpretivist as well – helping him to come together in studies of personality and culture in tandem with his political behavior research.

Content analysis is the “investigation of communication messages by categorizes message content into classifications in order to measure certain variables” [1] While the data existed to Lasswell in the form of analyzing the messages that Allied and Axis armies disseminated within warfare, it may not have been the most accurate of methodologies for analyzing the data. “Content analysts usually seeks to infer the effects of the messages that they have analyzed, although actual data about such communication effects are seldom available to the content analyst” [1] While Lasswell was able to perform this particular type of analysis, the weakness to this was that Lasswell could not verify his data due to communication effects not actually being available. This is because content analysis cannot study effects. While this was a weakness, he did develop content analysis as a communication tool that is still utilized today [1]

Leo Rosten included an appreciation of him in "People I have loved, known or admired".[4]

Lasswell made these contributions to the field of communication study:[5]