The Harold Washington Library Center is the central library for the Chicago Public Library System. It is located just south of the Loop 'L', at 400 S. State Street in Chicago, in the U.S. state of Illinois. It is a full-service library and ADA compliant. As with all libraries in the Chicago Public Library system, it has free wifi internet service. The building contains approximately 756,000 square feet (70,200 m2) of space. [1] The total square footage is approximately 972,000 square feet (90,300 m2) including the rooftop garden penthouse, according to the Zoning department of the city of Chicago. [2] 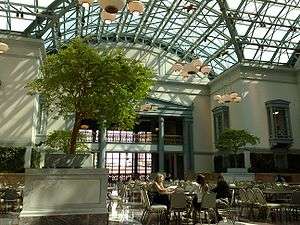 The Library's Winter Garden on the 9th floor

With the conversion of Chicago's former central library into the Chicago Cultural Center in 1977, a long-term temporary central library was opened in the Mandel Building at 425 North Michigan Avenue[3] and much of the library's collection was put into storage. A debate on a new central library ensued and continued throughout most of the 1980s, frustrated by a lack of funding. Upon his election in 1983, Mayor Harold Washington supported the construction of a new central library. After the turmoil of four mayoral administrations in a seven-year period, finally, in 1986 during Washington's tenure, the city and the Library Board picked a location and floated a $175 million bond issue to provide funds for the new building, as well as the entire city-wide, library branch system.[4] Finally, in 1987, a design competition was held by the city to decide on the architecture of the library. Five prominent entries were chosen from design-build coalitions of architects and contractors, representing designs by VOA Associates in collaboration with Arthur Erickson; Hammond, Beeby & Babka; Murphy/Jahn, Lohan Associates, and SOM. The entries were narrowed down to two finalists: The Chicago Library Team with Helmut Jahn's glassy, modern design, and the SEBUS coalition, whose postmodern design by Hammond, Beeby and Babka took elements from nearby historic buildings. Notably, Jahn's design was to have arched over Van Buren Street onto the area that is now occupied by Pritzker Park, incorporating a new elevated station on Chicago's Loop. These elements were deemed too expensive, along with the rest of Jahn's design, so the Hammond, Beeby and Babka design won the competition. The architectural models that the entrant teams created are located on the eighth floor of the Harold Washington Library Center, except the SEBUS entry, which is located in the ninth floor Special Collections.[5]

With the support of Harold Washington and Chicago's wealthy Pritzker family, ground was broken at the chosen site at Congress Parkway and State Street, covering an entire block. Upon the building's completion in 1991, the new mayor, Richard M. Daley, named the building in honor of the now-deceased former mayor Harold Washington, an advocate of reading and education among Chicagoans as well as an advocate of the library's construction. Before 1872, Chicago had mainly private libraries. England responded to the Great Chicago Fire of 1871 by donating over 8,000 books to the city, which became the foundation of the first public library. This collection was housed in a variety of locations, until the Central Library was built in 1891.[6] The Harold Washington Library opened on October 7, 1991. Since completion, the library has appeared in the Guinness Book of Records as the largest public library building in the world. 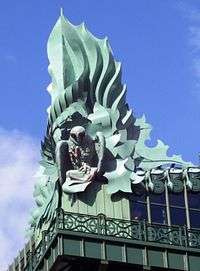 Owl on the southwest corner of the building

The exterior evokes the design of the Rookery, Auditorium and the Monadnock buildings. The bottom portion is made of large granite blocks. Red brick makes up the majority of the exterior. These two portions draw on the Beaux-Art style.[7]

The pediments and most of the west side facing Plymouth Court are glass, steel and aluminum with ornamentation hearkening to the Mannerist style.[7]

In 1993, the roof was ornamented with seven large, painted aluminum acroteria designed by Kent Bloomer with owl figures by Raymond Kaskey.[8] The acroterium on the State Street side depicts an owl, a symbol of knowledge due to its association with the Greek goddess Athena. The acroteria on the Congress Parkway and on the Van Buren sides contain seed pods, which represent the natural bounty of the Midwest. The acroteria angularia each contain an owl perched in foliage.

On the divide between the granite blocks and the brick portions are wall medallions that have the face of Ceres and ears of corn.

On the north, east and south sides of the build are five story tall arched windows. Between the windows are rope friezes.

All public doors lead to the lobby. The north public entrance on Van Buren is just east of the CTA's Harold Washington Library-State/Van Buren station, served by the Brown, Orange, Pink and Purple Lines. The corridor goes east, then south, then west, and opens south to the lobby. 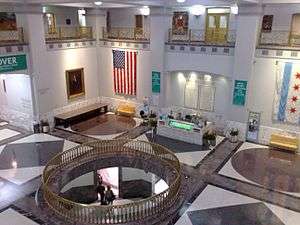